The War That Saved My Life by Kimberly Brubaker Bradley 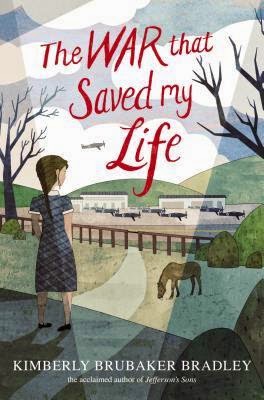 Born with a severely clubbed foot, Ada Smith, 10, has been kept imprisoned and abused by her Mam in a one room flat her whole life.  Mam sees her foot as a mark of shame and humiliation, and so Ada never learned to walk, scooting around on her bum as she waits on Mam and younger brother Jamie, 6.  Then one day, Ada decides to learn to walk, keeping at it despite the pain and blood.

Then, when war comes to England, Ada is told that Jamie will be evacuated, and she will remain in the flat - bombs or no.  But Mam doesn't know Ada's secret and when evacuation day arrives, she and Jamie take off for the train station together.  Eventually arriving at a small countryside village, all the children are selected by residents except Ada and Jamie, who are taken to the home of Susan Smith (no relation) and left in her care.

But Susan is depressed, mourning the death of her friend (though clearly more than friend), Becky.  The two women had lived there together for years and Susan had inherited the property.  The last thing she wanted now were two children to take care of.  And yet, she does.  She feeds Ada and Jamie, buys them new clothes and shoes to replace the dirty, raggy things they arrived in, and allows them to find their own way through a certain amount of benign neglect.

And Susan has a pony named Butter that Ada determines to learn how to ride and care for.  Soon, she is riding all over the village and surrounding area.  Susan has also taken Ada to a doctor about her foot, and she has been given crutches to help her walk.  But when Jamie begins school, Ada refuses to go not wanting to admit she can't read or do simple math.  Eventually Susan figures it out and offers to teach her at home - an offer not very welcomed by Ada.  But why not?

Ada and Susan are two people carrying around a lot of physical and emotional baggage, thrown together by a war they don't really feel connected to and which at first doesn't feel quite as real as the personal war they are waging with themselves.  But gradually, they forge relationships with each other and begin to feel like a family.  And then Mam shows up and takes the Ada and Jamie back to London, despite the bombing and Ada is forced to scoot around on her bum once again.

Now that they have seen another side of life, is it over for Ada, Jamie and even Susan?

What a powerful story The War That Saved My Life is.  It is everything that makes historical fiction so wonderfully satisfying.  There is lots of historical detail about London and the countryside in those early war days, including the rescue of British soldiers from Dunkirk (Susan's house is on coastal Kent, the closest point in England to Dunkirk).

I thought that Susan and Ada were drawn well, with lots of depth to their personalities, but not Jamie so much.  He really felt like just a secondary character, mostly there for contrast and to move the story along in a believable way.  The shame Mam felt over Ada's foot is quite palpable, but also seemed to empower her with the ability to abuse her daughter, making her plain scary, though a rather one dimensional character at the same time.

One of the things I found interesting is that in the beginning Ada, the child, is such a strong, determined character, while Susan, the adult, was kind of weak and irresolute.  And yet, they have things to teach each other.  And to her credit, Bradley doesn't actually come out and directly let the reader know that Susan and Becky were partners, but its clearly there.

This book is recommended for readers age 9+
This book was an ARC eceived from the publisher
Posted by Alex at 12:24 PM