The Summer of Lost Letters by Hannah Reynolds 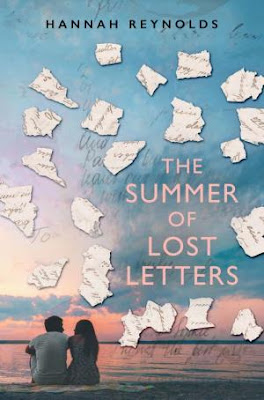 When a box of her O'ma's stuff arrives at the house addressed to her mother, Abby Schoenberg, 17, can't resist opening it. Inside, she finds a stack of love letters addressed to her O'ma, Ruth Goldman, living in New York City from someone named Edward living on Nantucket island, and who refuses to send Ruth a necklace she has asked to be returned to her. Not knowing much about her O'ma's past other than that she came alone from Germany as a 4-year-old shortly after Kristallnacht. Now, Abby is determined to discover more about her O'ma's life - who is Edward, why was he writing love letters to her in the 1950s and what happened to the necklace, which her Grandmother obviously never got back.

After doing some research, Abby discovers the letter writer is Edward Barbanel, who mentions a place called Golden Doors on Nantucket. Luckily, Abby lands a job working in a bookstore on the island, and a room shared with a girl named Jane, with whom she immediately becomes friends. And yes, everyone she meets knows the very wealthy Barbanel family, who are having a party at which Abby is invited to help serve. Naturally, her curiosity overcomes her and she is caught snooping around by Noah Barbanel, 18 and the handsome grandson of Edward.

To try to keep his family's personal business private and to protect his grandparents, Noah agrees to help Abby with her search to discover more about her O'ma and her family history. O'ma never talked about her parents and all the Schoenberg's knew was that they have perished in Auschwitz, but who they were and where they lived had always been a mystery.

In between her job at the bookstore and her attempts to discover more about her O'ma, there are parties on the beach, sailing, ice cream and new friends, even Shabbat dinner with the Barbanel family. Abby hadn't been looking forward to this summer with her friends away, but decides to take the advice of best friend Niko who tells her to go crazy, be bold, have some chutzpah. And that is just what Abby does.

The Summer of Lost Letters is a contemporary romance with some interesting historical fiction and some interesting historical facts throughout the novel and Reynolds has incorporated it all easily into the story. I thought it was interesting how she introduced some of the chapters with Edward's love letters almost as a portend of what is going to happen. I also thought that never getting to know who Ruth Goldman responded to the letters or what she felt was a great way to keep the mystery going. Of course, readers can  surmise her feelings for Edward by the fact of keeping the letters, despite having married another man (whom she did in fact love, too).

At first the tension and bickering in between getting along really well was kind of fun as Abby and Noah dances around their attraction to each other. But after a certain point, I honestly felt that this could have used some editing when I found myself muttering "oh my God, own it already." Others may find this kind of dance appealing.

In the end. all is revealed and I never saw it coming - and I really liked that. The end could come across as a little to pat, but that was fine with me. After all, this is a great summer romance to read, enjoy, and learn a few things.

This book is recommend for readers age 12+
This book was an eARC gratefully received from NetGalley
Posted by Alex at 11:49 AM