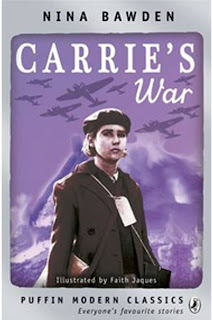 Carrie’s War is a coming of age story with a twist. While visiting the small Welsh mining town where she was billeted during World War II, Carrie Willow, a 42 year old widow with four children, tells them the story of her evacuation. At the start of the war, Carrie, then 11 and her younger brother Nick, 9, were put on a train along with so many other school children, to escape the anticipated bombing of London by the Germans.

In Wales, they end up living with a bullying, miserly shopkeeper, Mr. Evans, and his weak, oppressed younger sister, whom they are told to call Auntie Lou, eventually adjusting to life in this strained household.

Some months after arriving at the Evans home, Carrie and Nick are sent to fetch a Christmas goose at Druid’s Bottom, home of Mr. Evans other sister, Dilys Gotobed. Arriving at Druid’s Bottom, they discover that Albert Sandwich, a boy they met on the train to Wales, is living there, along with the seemingly magical housekeeper Hepzibah Green and Johnny Gotobed who has cerebral palsy. That night, Hepzibah tells them a story about a slave boy who was brought there and died within a year. Before he died, he cursed the house, saying that if his skull is ever removed from the house, some disaster would occur. Carrie half believed this story, even though Albert discredits it.

Happy and comfortable at Druid’s Bottom, Carrie and Nick spend as much time there as possible, entertained by Hepzibah’s stories, sated by her good and plentiful food and comforted by her warmth,. It is the polar opposite of life with Mr. Evans.

But everything changes when Mrs. Gotobed dies and Mr. Evans inherits everything, including Druid’s Bottom. Hepzibah and Mr. Johnny are told they have a month to make other arrangements for themselves. When Albert claims that Mrs. Gotobed said she had a will which took care of them, Carrie fears Mr. Evans may have taken it, and out of selfishness, denies it ever existed. In the middle of all of this, Carrie’s mother writes that she now wants the children to come live with her in Glasgow.

Bawden is spot on depicting the internal preadolescent emotional life of her character, giving the title of this story its irony. Carrie is a bundle of mixed emotions and conflicting feelings at war with each other, coupled with an overactive imagination. She has an overwhelming need to please the people around her, but also has feelings of anxiety about not being good enough. She experiences feelings of jealousy and hostility at her brother for his ability to get what he wants from people one minute and the next minute, she feels lovingly responsible and protective of him. And like most children, Carrie doesn’t completely understand the circumstances surrounding the adults in her world. This not understanding is what leads Carrie to commit the act that will arrest her “coming of age” and result a lifetime of living with guilt, prompting her to return to Druid’s Bottom with her own children 30 years later.

Carrie’s War is perhaps the most well-known book in Nina Bawden’s vast oeuvre. Just a little older than her main character, Bawden was evacuated from London to Wales at 14 in 1939, but returned to London in 1942. I am sure that Bawden’s experiences are what make Carrie’s War such a compelling story – as they say write what you know. Carrie's War was written in 1973, but still resonates in today’s world, making it definitely a book for read.

BBC produced a version of Carrie’s War in 2004 that is available on DVD, which is quite good, but I think failed to fully depict Carrie’s conflicted feelings, the whole point of calling it Carrie’s War.