A Place to Hang the Moon by Kate Albus 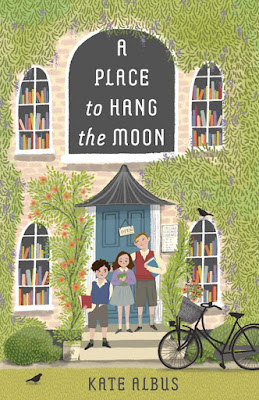 First they lost their parents and were taken care of by their cold, distant grandmother. Now she's gone, too, it's June 1940 and there's war on. So it's decided that the orphaned but with an nice inheritance Pearce children - William, 12, Edmund, 11, Anna, 9 - would be evacuated from their home in London. The plan is that they will be sent to the countryside with a school they never attended, in the hope that they will find a proper family that wants them, but to not say anything about their inheritance to be sure that they are wanted and not their money. Naturally, the schoolmistress, Miss Carr, resents the three additions to her responsibilities and isn't exactly welcoming, especially when William insists the siblings not be separated and Edmund gets into trouble right off the bat.

Arriving at their destination, the Pearce siblings are passed over until finally the Forresters, a family with two boys William's age, decides to pick them. At first, it seems like a good situation. Anna is given her own room and doted on by Mrs. Forrester, while William and Edmund share a room with Jack and Simon Forrester. But, it turns out that Jack and Simon resent the siblings, bullying William and Edmund at every chance and finally getting Edmund into serious trouble. Unfortunately, Mr. and Mrs. Forrester are convinced their sons can do no wrong.

Luckily, there's a nice library in the village and soon William, Edmund and Anna begin to go there afternoons after school. All three are big readers, and they find a real welcome when they meet the librarian, Mrs. Müller. Mrs. Müller has her own problems - she is married to a German who went home before the war and there's been no word about him since. Of course, it is assumed by the villagers that he is now a Nazi. Naturally, they ostracize Mrs. Müller and she is considered an unsuitable billet for evacuees.

Though life is pretty comfortable at the Forrester's, it soon becomes apparent that the billet isn't going to work out for the Pearce sibs and they are placed in a different home. Mrs. Griffith, whose husband of away fighting, is considerably poorer than the Forrester family and is the stressed out mother of four children. The Pearce siblings share an unheated room upstairs with one bed and a chamber pot, so they don't have to use the outhouse in the night. They are also expected to help out with the housework, help care for the children and surrender their ration cards and in return they get to be hungry and cold and get lice.

Luckily, William, Edmund, and Anna still have the warm, cozy library to which they can escape. and the always welcoming Mrs. Müller. Plus, she always has the best book recommendations for them. But when they discover their books, including library books, being torn up to use in the outhouse, they storm out of the Griffith house, determined to not return, and head to the church for warmth and because they are to be in a Christmas pageant that night. Mrs. Müller, who has suspected things weren't going well for the Pearce siblings, takes them home with her that night.

You may think that is the end of the story, but, no, it isn't.

I just love a good, cozy middle grade novel with just enough tension and frustration to me keep reading and this novel certainly meets that criteria. And the scenes in the library are described with such comfortable coziness, even on a cold day, that I wished I could have joined them.

William, Edmund, Anna, and Mrs. Müller are fleshed out with their distinct personalities and shared similarities. All four love to read, and there feels like a comfortable quiet sense of companionship in the library scenes that throughout the novel I kept thinking how sad it was they the Pearce children couldn't be billeted with Mrs. Müller. It felt like such a perfect fit compared to the Forresters and Mrs. Griffith. Luckily, the kids are their own best friends, and support each other no matter what.

I like the way Albus has really captured some of the hardships people faced during WWII. Many evacuees were not welcomed in the towns and villages of the English countryside, and the words "filthy Vakies" graffitied onto a wall in this story pretty much sums it up. Some were only taken in for their ration cards, but still went hungry all the time. And then there is the suspicion many people had at that time towards anything and anyone German, here it is aimed at Mrs. Müller. The only thing missing was the words "fifth column."

A Place to Hang the Moon is a wonderful choice for readers who like books about the kids who are faced with seemingly impossible challenges of the WWII home front. If you loved The War That Saved My Life as much as I did, this is definitely a book you will enjoy.

This book is recommended for readers age 9+
This book was gratefully received from the publisher, Margaret Ferguson Books/Holiday House
Posted by Alex at 9:22 AM