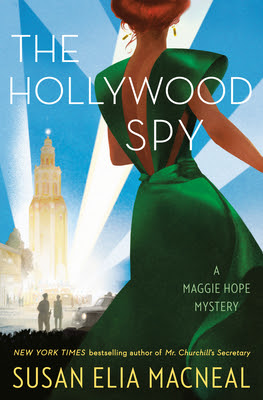 It's hard to believe I've just finished the 10th Maggie Hope mystery. It feels like I read the very first book, Mr. Churchill's Secretary, just yesterday. And yes, Maggie has had some incredible adventures since then. But now she is off to Hollywood, California to help her old friend John Sterling solve the mystery of his fiancée's death. You may recall that at one time John had been Maggie's love interest. Later,as an RAF Pilot, he had been shot down over Germany. John was originally presumed dead, he did return to England. No longer able to fly, he was an aide to Winston Churchill, until Mrs. Roosevelt's Confidante, when he leaves at Christmastime 1941 for Hollywood to work for Walt Disney, hoping to develop a gremlin story idea he has.

It's now July 1943 and solving a murder in sunny Hollywood, California couldn't be more different than Maggie's dangerous bomb-defusing work in war-torn London. Now, Maggie is staying at the plush Chateau Marmont on Sunset Boulevard with her old friend Sara Sanderson, a ballet dancer who has a small part in a film that George Balanchine is choreographing.

But Hollywood isn't as sunny as Maggie first thought. America has been in the war since December 1941 and the country has mobilized - more or less - to support the war effort. But, there is also pollution from the nearby factories,  Zoot Suit clashes between Mexican Americans and whites in the Navy, crooked cops, Ku Klux Klan and Nazi supporters, and, of course, the death of Gloria Hutton, John's fiancée. When Gloria was found dead in the swimming pool of the Garden of Allah Hotel after a party, her death was ruled an accident. But Gloria was also involved in a high profile divorce from her husband of a few months, Titus Hutton, that involved a hefty financial settlement for her.

As Maggie investigates Gloria's death, she discovers there have been other suspicious deaths, all linked to a sedition trial of some Nazis in Sacramento. Gloria had been promised protection because she was afraid the if the Nazis discovered she had testified, her life would be in danger. After all, she had worked as a secretary for one of the Nazi leaders in Los Angeles.

Needless to say, this is an exciting novel. It can be tough to keep a series fresh and interesting, but MacNeal has put Maggie into so many different eventful global situations that each novel retains its own crispness. And honestly, I was ready for a little glitzy glamour in Maggie's life after the darkness of the  last book, The King's Justice. Am I ready for a redo of Maggie and John? I don't know and if Susan Elia MacNeal knows, she wasn't telling in this book.

I did like that we learned a little more about Maggie's Aunt Edith, a forward thinking woman, and her partner Olive. I always picture Aunt Edith as an old woman wrapped up in math problems, but was happy to hear about her war work. It made her feel more lively and energetic. I hope we readers really get to know her better someday.

There is a lot of American history in this novel and I think readers may be surprised at how much unrest and racism there was back them. One of the things I like about this series, and it's also very true in The Hollywood Spy is the amount of authentic flavoring that is always a part of a Maggie Hope mystery. People, places, songs and movies play their part in bringing the time period to life for readers. And I think more than any other Maggie Hope mystery, this one will really resonate in today's world.

What's next for Maggie Hope? Well, there is a bit of a hint at the end of the book, but I guess fans will just have to wait and see. I hope it's not a long wait.

This book is recommended for readers 14+
This book was an eARC received from NetGalley
Posted by Alex at 10:53 AM