Voyage of the Sparrowhawk by Natasha Farrant 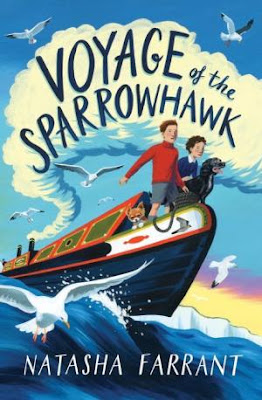 It's spring 1919, and Ben Langton, 13, feels like he's lost almost everything. His adoptive father Nathan was killed in a bombing in France during World War I when he visited Ben's older brother Sam, wounded in the war. Now, Sam is missing, presumed dead. But Ben refuses to give up hope that Sam will one day return to England and has decided to live on Nathan's narrowboat, the Sparrowhawk, thinking that is where Sam would head to when he comes home. After all, it had been home to the three of them and their dog Elsie for years.

Lotti St. Rémy, 12, is living in her parent's large house called Barton Lacey with her rather unlikable Aunt Vera and Uncle Hubert Netherbury when she isn't being shipped off to dreadful boarding schools only to get expelled. Her parents had both died in an accident and the Netherbury's were Lotti's guardians. What Lotti doesn't understand is why she hasn't heard anything from her beloved French grandmother since her parents death. Grandmother and granddaughter has always been so close.

Ben and Lotti meet onboard the Sparrowhawk after Lotti rescues an abused Chihuahua she promptly renames Federico. Naturally, her uncle threatens to have it shot when he discovers it and send her off to the most dreadful boarding school yet. Ben has been dodging the local constable, Albert Skinner, who doesn't believe Sam is coming home and wants to put Ben back into the orphanage he and Sam has lived in before Nathan adopted them.

Somehow, Lotti convinces her uncle to let a reclusive Clara Primrose tutor her and Ben. Clara has been waiting for the love of her life to return from the war, having promised to wait for him and earning her living as a translator.

But then Clara disappears from Great Barton, and since Ben and Lotti are both 'on the run' from authority figures anyway, they ultimately hatch a plan to take the Sparrowhawk across the English Channel to France to find Sam and Grandmother St. Rémy. There's just one problem. The Sparrowhawk is a narrowboat, it has a flat bottom meant only for smooth sailing through England's many canals, not the open sea. Ben and Lotti, now sporting short hair and boys clothing and calling herself Charlie, set off, only to discover that the constable coming after them. Enter Frank, skipper of the Secret Starling, and old friend of Nathan's, who agrees to help them cross the English Channel. But can the Sparrowhawk, Ben, Lottie, Frank, Elsie and Federico survive the rough currents of the Thames and the Channel?
Two lonely, friendless children, one broken-hearted tutor/translator, one adventurous narrowboat skipper with an emotional connection to Nathan, and two dogs are all tied together in this heartwarming adventure story and what an adventure it is. The overriding theme of this story is family and home and how the loss of one member can make someone feel less than whole and less at home with themselves. Each character, even the constable, has suffered a loss because of WWI that has sent their lives off course and each is looking for a way to set the course straight again and the Sparrowhawk certainly serves as a nice metaphor for this theme.
The story is told from the third person points of view of several characters, giving readers insight to what is going on with all of them. Ben and Lotti/Charlie meet several secondary characters on their journey, who of whom are willing to help them for their own reasons. Readers may find there are lots of coincidences or lucky breaks throughout, but, hey, that's the stuff of middle grade fiction and it works really well here because there are also enough obstacles to overcome.
Voyage of the Sparrowhawk is an exciting, poignant tale with a cast of some very likable characters and some real scoundrels. I should mention that while the war is the cause of everyone's unhappiness, it is really a postwar tale so readers may find Farrant's descriptions of France somewhat graphic, though not overwhelming so. For American readers who may not be familiar with narrowboats, there is an illustration at the front of the book, as well as a great description of the boat's interior at the beginning of the story. There is also a map and timeline of the journey Ben and Lotti undertake.
This is middle grade adventure at its best!
This book is recommended fro readers age 9+
This book was an eARC received from Edelweiss+
Posted by Alex at 11:27 AM