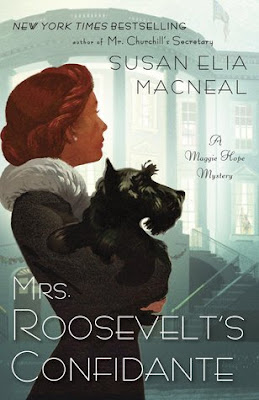 It's Christmastime1941 and the United States has been at war for just a few weeks.  Elated that they will finally have an alley in their fight against the Nazi war machine, Winston Churchill and his entourage, including John Sterling and David Greene, has just arrived in Washington DC after a long, harrowing Atlantic Ocean crossing dodging Nazi submarines and rough seas.

Eleanor Roosevelt's temporary secretary Blanche Balfour hasn't shown up for work, didn't even call in, and now, the President's wife is worried about her.  Churchill volunteers Maggie to help Mrs. Roosevelt because "she's an excellent secretary and helpful in all sorts of...situations."  Which is good, since the two women discover Blanche's body in her bathtub with her wrists slashed when they arrive at her apartment.   Quick thinking Maggie anonymously telephones the police, and noticing a notepad, wisely takes it with her.  Back at the White House, Maggie softly rubs the notepad with a pencil, revealing what looks to be a suicide note from Blanche, except that it isn't her handwriting.

The note claims that Mrs. Roosevelt made unwanted advances at Blanche, trying to kiss her, which, of course, the First Lady denies vehemently.  But the suicide note is only a ruse designed to turn people against the Roosevelts and discredit them., thereby jeopardizing their wartime support.  There are those who are also very unhappy with Mrs. Roosevelt's interfering in the upcoming execution of a young black Virginia sharecropper, Wendel Cotton, for killing a white sharecropper.  The First Lady and Wendel's lawyer, Andrea Martin, believe his trial was a sham, consisting of 12 white men who could pay the $1.50 poll tax.

But why would anyone want to besmirch the Roosevelt's using the Wendel Cotton execution as their fodder?  Trust me, it isn't for the obvious reasons.

Mrs. Roosevelt's problem is the central Maggie Hope mystery, but there are other story lines making this a busy novel and these will be, I assume, expanded upon in future books.  There is the increasing/decreasing/increasing sexual tension between Maggie and John Sterling, who despite having adjoining hotel rooms, never seem to be able to get together.  And there is a storyline about Clara Hess, Maggie's mother and Nazi spy, and one about the effort the Germans put into building a rocket (a precursor to the eventual V-bombs the Nazis lobed at England in 1944-45?).  And now that the US is in the war, there is the more intense relationship between Churchill and Roosevelt.

There is also a nice bit about Walt Disney and his wartime propaganda.   No longer able to fly with the RAF, John Sterling has been developing a gremlin story, those pesky little creatures that plague the pilots on the RAF by sabotaging their planes and Disney is very interested in it (The Gremlins was Roald Dahl's first children's book.  Dahl was also an RAF pilot, and later posted in Washington DC.  His story was published in 1943 by Disney).

Mrs. Roosevelt's Confidante is every bit as well-written and well-researched as the four other Maggie Hope mysteries, but I have to admit I didn't enjoy reading it as much.  I think it is because there was too much going on and not enough mystery.  On the other hand, I really enjoyed all the interesting people and pop culture bits that MacNeal included, maybe because the story takes place in Washington DC, a place near and dear to my heart and because I know American pop culture so well.  But, I will be glad when Maggie returns to Britain, where they seem to have better mysteries.

Oh, yes, in Mrs. Roosevelt's Confidante readers get to finally meet the infamous Aunt Edith and, let me say, she is a trip.

MacNeal has touched on several themes that will definitely resonate with today's readers and, even though it isn't my favorite Maggie Hope, I still highly recommend reading this fifth book in the series.