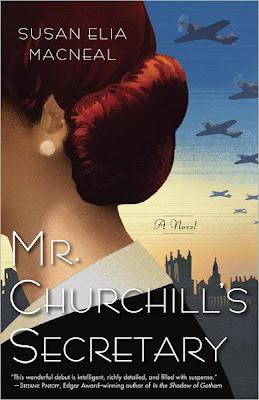 Mr. Churchill's Secretary is a debut novel and the first in a series centering on Maggie Hope, the American raised daughter of British parents, a Wellesley grad who went to London in 1939 to sell the house she inherited from a grandmother she never knew.  Then war was declared and Maggie stayed on to do her bit for the war effort.

Unable to sell the house, Maggie now shares it with a few other young women - Paige Kelly, an old college friend, Charlotte McCaffrey A/K/A Chuck, and twins Annabelle and Clarabelle Wiggett.  Into this mix is added a few males like Maggie's good friend David Green and the not so nice Richard Snodgrass and the charming John Sterling, who often knows more about things than he lets on.  All three men work as private secretaries for Winston Churchill, the new British Prime Minister.

Maggie had actually applied for the job as a private secretary to the new PM, but despite being brilliant and totally qualified, gender was everything in 1940 and she lost the job to Richard - hence, he is not a favorite person of Maggie's.

But then, when Diana Snyder, a typist at 10 Downing Street, is found murdered, David talks Maggie into applying for the job as her replacement in the typing pool, even thought they both know she is more suited to be at Bletchley Park breaking Nazi codes alongside the best minds in England.  And Churchill decides that she is indeed the person they need, because, as he says, they can use a little hope at Downing Street.  But Maggie is not just an ordinary typist in the pool and it doesn't take long for her to be caught up not just in wartime events and her job, but also in the mystery of who killed Diana.

Mr. Churchill's Secretary is an exciting mystery adventure that takes all kinds of twists and turn and just when you think you know who killed Diana Snyder, you discover that you don't.  But there are plenty of suspects, so you could make a wrong guess more than once.  And this is one of the things that makes this book so good.

Other good things: MacNeal manages to weave in a Hope family mystery, some good espionage, code breaking, the IRA (Irish Republican Army) and even a possible love interest for Maggie.  And all the whole none yards* is wrapped in a cloak of history making this historical fiction at its best - the blitz, blackouts, rationing, air raids and even St. Paul's Cathedral are realistically portrayed they play their part in Maggie's life.

And Maggie herself is a strong captivating and compelling redhead, never afraid to say what is on her mind, yet always considerate and kind to her friends and co-workers.  Not even Winston Churchill can intimidate her Maggie and I like that about her.

This is an energetic debut mystery.  And like all novels in a series, it has the task of introducing the reader to the cast of recurring characters and giving enough background information about them, and even though I felt like it took a while to get to the mystery about Diana Snyder, I still had fun getting to know all the characters along the way and seeing the vivid pictures that MacNeal paints of 1940 wartime London.

It is always hard to write about mystery books, especially the ones your really like as much as I did Mr. Churchill's Secretary, because you need to find the fine line between enticing other to read the book and not giving too much away and spoiling the mystery.  Hopefully, you will just feeling enticed right now.

MacNeal has already finished Princess Elizabeth's Spy, the second Maggie Hope mystery and I was lucky enough to get a signed copy at this year's BEA.  I loved meeting Susan Elia MacNeal and wish her all the best with this series.  I hope there are many more Maggie Hope mysteries to come.

A word about the cover art: cover art is so important and the cover illustration for Mr. Churchill's Secretary was done by Mick Wiggins and I simply love it.  It is just so much his style and he has captured perfectly Maggie's most defining physical feature, her red hair, so well against the backdrop of wartime London.

This book is recommended for readers age 14+
This book was purchased for my personal library.