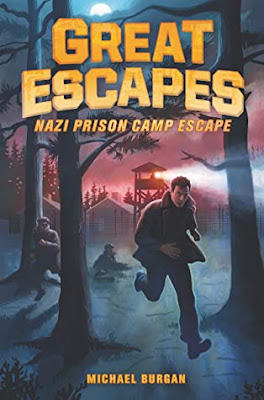 Nine-year-old Bill Ash knew he wanted to be a pilot even before the day in 1927 when he saw Charles Lindbergh in Dallas, Texas. But the Depression hit his family hard and left little time to think about flying. Then, in 1939, war was declared in Europe and, wanting to fight Hitler, Bill went to Canada to join the Royal Air Force there. Turns out, Bill was a natural in the air.
By 1942, he was flying missions from England to Europe in a Spitfire. And he was successful, that is, until March 24, 1942, when his plane was fired on. He crash landed in France, and with the help of some kind French people and the French resistance, almost made it back to England via Spain. But almost doesn't count - Bill was discovered and arrested by the Gestapo in Paris.
Bill was questioned and tortured to give up the names of the people who helped him in France. Thinking about the young girl named Marthe who had helped him, Bill was able resist the many beatings by the Gestapo. Eventually, he was sent by cattle car headed to Germany. There he was sent to a Nazi prison camp for POWs called Stalag Luft III.
Once he reached Stalag Luft III, the urge to escape was great. But the first attempt failed and Bill found himself spending two weeks in solitary confinement a/k/a the Cooler. Undaunted, Bill and some of his fellow POWs kept trying to escape, followed by two weeks in the Cooler and nothing to eat but bread and water.
When Stalag Luft III became crowded, Bill and others were sent to another POW camp in Poland via cattle car, which proved to be yet another failed escape attempt. In Poland, Bill and 24 other men decided to dig a tunnel from inside the latrine. They figured the smell of the latrine would keep the fastidious German soldiers away. Finally, in March 1943, thirty-three men were ready to escape. And Bill did make it to freedom, until he was caught...again. After even more escape attempts, Bill found himself back in Stalag Luft III, where he discovered he was known as the Cooler King.
Back where he began life as a POW, there were more escape attempts until finally in 1944 came the good news that the Allies had landed in France, and by 1945, they were in Belgium on their way to Germany. Bill and the other prisoners were forced to march from Stalag Luft III to Spremberg, Germany, where they were loaded on to cattle cars. By now, Bill and other POWs were ill, and taken to a military hospital outside Bremen, Germany. By the time he had recovered, the British were shelling the camp Bill was in, not realizing there were POWs there. Bill made one last escape attempt. This time he succeeded and was able to tell the approaching British tanks just were they Germans had positioned their tanks.
Finally, after 13 attempted escapes, the war was over for Bill Ash and he was a free man.
Great Escapes is a debut series and it is getting off to an exciting start with Nazi Prison Camp. Presenting Bill Ash's story in this short, but action-packed historical fiction novel is a great way to get reluctant readers reading as well as giving kids interested in WWII stories something different. After all, most kids know about Nazi concentration camps, but not much about what happened to POWs, and may have even just assumed they were immediately killed.
There are sidebars to Bill's story in the first three chapters with information about The Depression, Concentration Camps, Spitfires and Other Aircraft of World War II, The Resistance to German Rule, andThe POWS of World War II. These are all topics readers will encounter throughout the novel. Sometimes I find sidebars intrusive in historical fiction. It was nice to read them at the beginning of Bill's story so that the exciting escapes weren't interrupted with information and readers already know what they need to know. And since it is a story about POWs, it is also a good way to introduce them to the Geneva Conventions that "spelled out how countries would treat prisoners of war."
There is a Selected Bibliography and an Author's Note in the back matter. A map is included at the beginning, but I wish it were a more detailed map to give young readers a sense of place and distance. Descriptions of Bill's escape attempts are detailed and riveting. Bill Ash's story is a survival story par excellence.
This book is recommended for readers age 9+
This book was an EARC gratefully received from Edelweiss Plus
Bill Ash passed away in 2014 at the age of 96. You can read his informative obituary HERE
Posted by Alex at 10:25 AM