From the Archives #3: The Chalet School in Exile by Elinor Brent-Dyer 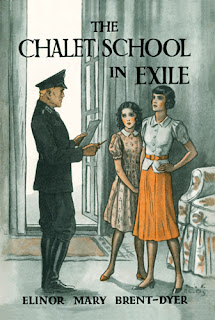 Elinor Brent-Dyer’s Chalet School series is about an international school set on the fictitious lake Tiernsee in the Tyrolean Alps of Austria and narrates the adventures of students and staff. The series begins in 1925 with the novel The School at the Chalet. and The Chalet School in Exile is number 14 in the series. The Anschluß or annexation of Austria into the German Reich on 12 March 1938 provided Brent-Dyer with some new and exciting material with which to continue the series. Altogether, she managed to write six books in which the war forms a part of the story to a greater or lesser degree.

The Chalet School in Exile begins in February 1938. Concerned about the widespread attraction of Nazism among Austrian youth, Madge (Bettany) Russell, the founder of the Chalet School, and her husband, Dr. James ‘Jem’ Russell decide to move the school across the lake near his sanatorium on the Sonnalpe for safety.

A plebiscite vote was supposed to be held in March to determine whether Austrians wished to remain independent or become part of the Reich, but it never happens. When the Nazis march in and take possession of Austria, parents start to make arrangements to remove their daughters from the school. Before anyone leaves, however, the students get together, form a peace league “and vowed themselves to a union of nations, whether they should ever meet again or not.” (55) The vow is signed by every girl at the Chalet School, but creates a problem of where to hide it, since it could put so many girls at risk should it somehow fall into the hands of the Gestapo:

“Many of the girls were well on in their teens, and, from all accounts, Hitler and his crew were perfectly capable of punishing them. Already there were whispers of concentration camps.” (56)

They decide to hide the paper in a cave and a picnic excursion to it is arranged, which includes Joey Bettany, Madge’s younger sister and former Chalet School student, Dr. Jack Maynrd from the sanatorium, and several students including Robin Humphries, the Russell’s ward. On the way, they meet Frau Eisen and her son Hermann, who gives them the Heil Hitler greeting instead of the traditional Tyrolean Grüss Gott. Hermann notices an envelope in Robin’s pocket and decides it might be important. After a while, Hilary and Robin decide to slip off to the cave. When they don’t return, the group begins to get very worried. Joey finds Hermann at the cave, who admits he had followed the two girls and had seen them enter it. Though they search the cave, they find no evidence of Hilary or Robin having been there. The Peace League Pledge was definitely not in the place they had intended to hide it in.

Once in the cave, Hilary and Robin realize that they have been followed, decide not to leave the Peace League Pledge there and find another way out of it. On their way back to the picnic area they meet Dr. Gottfried Mensch, who drives them home. Two hours later Joey is carried into the Russell’s home by Dr. Maynard and that night, they become engaged.

In late April a man from the Gestapo shows up with an arrest warrant to take everyone from the picnic to Innsbruck, where they have been accused of espionage against the Reich. Joey refuses to go and the British Consul is called in to deal with the Gestapo agent. Ultimately, only Jack Maynard goes to Innsbruck. The Consul, however, suggests that they close the school or move it elsewhere, and warns that it is only a matter of time until the sanatorium is closed by the Nazis.

The Gestapo detains Jack Maynard for a week and when he returns, Jem tells him of the plan to move the school again, advises him to marry Joey quickly and get her and Robin out of the country. Before leaving, a group of girls, including Joey and Robin, along with science mistress Nell Wilson decide to do some shopping in town. Everyone is careful about what they say and do after the incident with the Gestapo until late afternoon. While having coffee in a Gasthaus, Joey notices a skirmish out on the street and sees


“an old man with a long, grey beard, plainly running for his life. A shower of stones, rotten fruit and other missiles followed him. Stark terror was in his face, and already he was failing to outdistance his pursuers.” (119)

Robin, recognizing the man as Herr Goldmann, the Jewish jeweler, runs out of the Gasthaus, followed by Joey and the rest of the party. They surround Herr Goldmann,, but when Joey reminds the leader of the gang of the kindness he was shown by Goldmann and his wife in his time of need, he retorts


‘He’s a Jew! Jews have no right to live!’ declared Hans Bocher sullenly. ‘Give place, Fräulein Bethany, and hand over the old Jew to us! Better take care, or you’ll be in trouble for this. Let him go! We’ll see to him!’ (120)

Miss Wilson, meanwhile, drags Robin and Goldmann into the Gasthaus and persuades the owner to let Goldman escape through his back door. Then she pushes Robin at the owner and tells him to get her to the Sonnalpe at once. When Miss Wilson returns to the street, she sees the girls surrounded by an angry crowd, but the parish priest, Vater Johann, is also there and indicates that they should all to follow him into the church. Once inside with the door barred, they all know they are safe only for a moment. Vater Johann leads them to a hidden trapdoor, tells them to go down and follow the path which leads to the mountain-side. After wandering through the tunnel for hours, they finally come to what Joey recognizes as the cave that Robin had discovered. All are much relieved, but to everyone’s amazement, and as if to underscore the danger of the fearful situation they have all been in, Miss Wilson’s rich chestnut hair has turned snow white. It is decided that it is too dangerous for this group to stay at the Sonnalpe and that they, along with Jack Maynard and Gottried Mensch as guide, must flee Austria as soon as possible and the adventures continue from here.

The Chalet School in Exile is a novel full of adventure and surprises and accurately conveys the cruelty of Nazism and the Gestapo and the fear they could instill in people who opposed them. But it also sent a message of courage and solidarity in troubled times, in the form of strong friendships among the girls, pride in being Chalet School girls and the Peace League Pledge in defiance of Nazism.  After writing thirteen novels with such a beautiful, tranquil setting as the Austrian alps, it must have been terribly difficult for Brent-Dyer to have her idyllic if imaginary school setting ruined by the Nazis, but she went on to invent other settings almost as lovely.

Although it is part of a series, The Chalet School in Exile can be read as a standalone novel and is probably one of the best in the series, though I liked the next one, The Chalet School Goes to It just as much. The series was popular among adolescent girls when it was written and today still has a very large fan base of readers of all ages. The novel was first published in 1940, and there are lots reprints, some terribly abridged. Girls Gone By Publishers reissued the original text in 2003 and again in 2009 for the 70th Anniversary of the outbreak of World War II.

This book was purchased for my personal library.
Posted by Alex Baugh at 7:42 PM