This week the Weekly Geeks question is 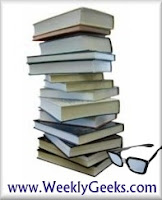 So this week, write a post sharing with us what old antique books you may have on your shelves, and tell us the story behind them. Did you inherit from a relative? Are you a collector of old and rare books? Did you just discover a certain book in a used book store and couldn't pass it up? What's the very oldest book you have? Do you even like old books? Or do they creep you out? Do you read and enjoy your old books, or is it more a "look and don't touch" thing?

To which I reply
I have a lot of old books but none are what may be called antiquarian. For the most part, they are books I read as a child, either bought for me or handed down. None are valuable, except to me for sentimental reasons. I have a bunch of Nancy Drew books that were published in the 1930s and 1940s that can no longer be read because they are in such fragile condition. But they have had a good productive life, belonging to several cousins and a sister before they reached me. And I have 10 of the 12 Blythe Girls series from the 1920s and no idea where they came from, but I love them. And The Five Little Peppers books are there too. The one trait they all have in common is that they are series books and I have loved series books since the first one I read.

My two favorites are The Bobbsey Twins books and the Anne of Green Gables series because I have such great memories attached to them. My mother was a voracious reader as a girl and an adult and encouraged her own children to follow her example. When I was five I picked up a Bobbsey Twins book that belonged to my sister. She, being older, naturally had a fit when she found out that I had touched her stuff. So every Friday evening, my mother and I would walk down to Flatbush Avenue, in Brooklyn, to a little bookstore next to the old Dutch Reformed Church. I was allowed to purchase one book every week, but the deal was I would only get a new book when I completed the one I had previously bought. There were two things I loved about those Friday excursions. First, it was my special time with my mother, sans siblings. Second, I can still remember the smell those books have when they were opened. It was such a distinct smell, and even now when I dust them, the smell is still there. It must be a combination of the paper and ink. After a while, my reading expanded and I could buy Nancy Drew, Cherry Ames and series other books. You might ask why not just go to the library? They didn’t have this type of series books.

The story is a little different with Anne of Green Gables. When I was in the 4th grade, I became very sick and missed a several weeks of school. By the end of the second week, I think I was beginning to get on my mother’s nerves. I have never, to this day, been a good patient and my mother was a really patient nurse, so you can imagine what a pain in the neck I must have been was. I was left in the care of a neighbor one morning while my mother went off to do errands. It turned out that she had gone to the library and checked out Anne of Green Gables for me. This, she said, was her favorite book when she read it as a girl and she think I would also like it. I opened the book and fell in love. During this long convalescence, my mother hunted down the rest of the series, which the library didn’t have and I still have those books today. Before she passed away, she and I often reminisced about our book bond. A passionate love of reading is the one thing my siblings didn’t share with her (they had their own special bonds with her.)
I am always reminded of Eudora Welty words from “A Sweet Devouring when ever I looked at my collection of old series books:

“My mother took me to the public library and introduced me: ‘Let her have any book she wants, except Elsie Dinsmore.’ I looked at the book I couldn’t have and it was in a row. That was how I learned about the series books. The Five Little Peppers belonged, so did The Wizard of Oz, so did The Little Colonel, so did The Green Fairy Book. There were many of everything, instead of one. I wasn’t coming to the end of reading, after all – I was saved.”

This quote always makes me feel happy, as do my small collection of series books.  Here are some pictures of a few of them. 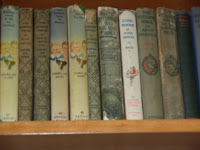 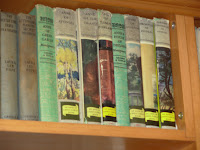 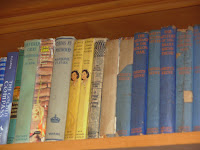 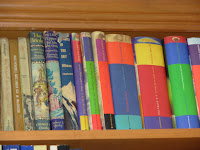