From the Archives # 15: Emil and the Detectives by Erich Kästner 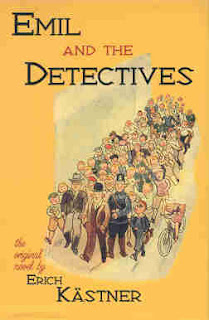 This is the second week of the German Literature Month challenge and for that we were supposed to read a crime novel.  I considered a lot of different choices, but decided on Emil and the Detectives for one simple reason.  That reason is that it is a book I haven’t read since forever and I really like Erich Kästner.

Emil and the Detectives is a pretty straightforward story.  Young Emil is being sent off to Berlin to visit relatives for a week long holiday.  He is taking the train and carrying money, which his mother instructs him to give to his grandmother when he arrives in Berlin at the Friedrich Straße and not to lose it on the way.
The train ride lasts a number of hours and Emil finds himself in a full compartment.  One of the women knows someone from Emil’s hometown and asks him to carry her regards to him when he returns home.  After a while, Emil finds he is in the compartment with only one other person, a man with a mustache and a bowler hat who introduces himself as Mr. Grundeis.

Mr. Grundeis makes Emil feel very uncomfortable, and he must fight to stay awake because of that.  But eventually he succumbs, believing the money is safe, pinned to the inside of his jacket.  However, when he awakens, much to his horror, he finds the money is gone and sees Mr. Grundeis getting off the train at the Tiergarten station.  Emil quickly gathers his belongings together and follows him, sure that he in the person who stole his money.

Emil follows Mr. Grundeis to a café where, while he is spying on him, he meets another boy named Gustav.  He explains the situation to Gustav, adding that he cannot call the police because he himself had committed the crime of drawing a red nose and mustache on the statue of the Grand Duke in his hometown of Neustadt.  Gustav offers to help Emil get his money back and soon produces 24 other children, all ready to help.  What follows is priceless.

Since Emil already knows the identity of the person who stole his money, the novel isn’t a classic ‘whodunit’; it doesn’t involve any of the usual detection methods of finding a criminal.  What it does do is present a highly organized, well run effort on the part of the “detectives” in trapping and capturing the thief who stole Emil’s 140 Marks.  But don’t think this is a classic coming of age story, it isn’t.  It is just an adventure in the lives of these kids, and at the end, they go home unchanged, but satisfied.

Emil and the Detectives is considered to be the first children’s book featuring a child detective and it is Kästner’s best known and most loved children’s book, published continuously since 1928.  He hated the Nazis and they didn’t like him much.  All his books were burned on May 10, 1933, because they were considered to be contrary to the German spirit.  The only exception was Emil and the Detectives.  I guess the Nazis figured that this group of 24 detectives was too clever to renounce.

What I really like about this book is that Kästner seems to have had a high regard for children, portraying them as clever, thoughtful individuals capable of rationally planning and carrying out a way of catching a thief, but still able to commit childish pranks such as Emil’s indiscretion with the statue of the Grand Duke.  But for the most part, Kästner expects his child characters to be uncorrupted and to act morally and they don’t disappoint.

Even if you are not familiar with Emil and the Detectives, Kästner is a familiar writer to us.  In 1949 he wrote Das doppelte Lottchen.  Walt Disney found this story and produced the 1964 movie The Parent Trap with Hayley Mills and again in 1998 with Lindsay Lohan, based on it.  Emil and the Detectives was also made into a movie in 1964, but it apparently wasn’t very good.

There are not many translations of Emil and the Detectives, and in fact, a new and better ones really needs to be done.  In one translation, Emil's last name Tischbein is translated as Tabletoe, which isn't even correct, it should be Tableleg - Avoid this translation at all costs!!   The English edition I read was published by Barnes and Noble and it was terrible, but Emil continued to be Emil Tischbein.  It did  completely anglicized the story, so expressions like topping or tophole are found and the Marks are turned into British Pounds.  Of course, it would be best to read it in the original German, which is wonderful, but not always possible. And don't overlook the wonderful illustrations by Walter Tier.  Though the translation may leave much to be desired, they always stick to the Tier illustrations.

Emil and the Detectives
Erich Kästner
Barnes and Noble
1998
102 Pages
Posted by Alex Baugh at 12:53 PM

Email ThisBlogThis!Share to TwitterShare to FacebookShare to Pinterest
Labels: From the Archives, Middle Grade, Mystery, Pre-WWII