The Summer We Found the Baby by Amy Hest 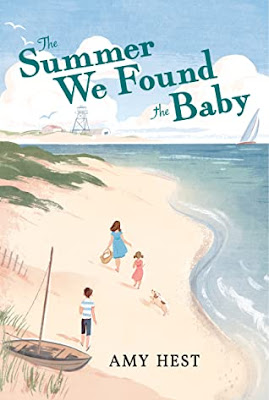 The country may be at war, but on the morning of the dedication and opening of a new children's library in Belle Beach, Long Island, Julie Sweet, 11, has baked an angel food cake (her first cake ever). And even though George, the dog, helped himself to some of it, enough was rescued and so Julie and her younger sister Martha, 6, are heading over to the library with it and that's when they find an abandoned baby - left in a basket on the library steps.
On the same morning, Bruno Ben-Eli, 12, is heading for the train station without his parents permission or knowledge, to travel the 70 miles to NYC. His older brother, Private Benjamin Ben Eli is counting on him to find someone and to deliver a message to her. And it is a request Bruno has every intention of carrying out despite his mother being the head librarian at the library and in charge of the day's celebrations.
By the time Martha waves Bruno over to the library steps, Julie has already fallen in love with her found baby, whom Martha has named Nancy. When Bruno asks what she's going to do with the baby, Julie decides to take off down the beach carrying the baby in the basket, Martha in tow. And even though he has something else to do, Bruno, really former friend Bruno, follows them, convinced Julie is heading for Camp Mitchel, an army base a few miles away.
As this is going one, each kid recalls how they got to this point. Julie and Martha are summer visitors to Belle Beach, brought there with their dog George, by their widower father who is working on a book, and who has also taken an interest in a woman from the army base. Julie, who remembers her mother Eleanor, thinks about her a lot this summer, and because of her name, she had written a letter to Eleanor Roosevelt inviting her to the library dedication. Martha, who has grown quite attached to Mrs. Ben-Eli, is always asking Julie for stories about the mother she never knew. And Bruno, who looks up to his brother, thinks about his enlistment and the girlfriend he had before he left for the army and to whom he wants Bruno to deliver his message.
All this results in a wonderful historical mystery novel. The story is told in twenty short chapters and within each chapter, told from the alternating perspectives of Julie, Martha, and Bruno. Filled with many sweet moments, Ms. Yingling was right to compare it to Cynthia Rylant's Rosetown. That's just what it reminded me of, too. While the story unfolds with the same kind of slow and easy gentleness, it is never boring. In fact, it felt like a warm summer day at the beach towards the end of the season, and that is one of my favorite kind of days. It kept me reading. Well, that and the several mysteries that peaked my curiosity.
Mysteries like: Who is the baby and why was she left on the library steps? And why is Bruno a former friend of Julie's even though she and Martha are so friendly with his mother? What is the message Bruno is supposed to deliver? Who is Tess and was that really Eleanor Roosevelt who showed up at the library dedication and enjoyed some of Julie's dog-tested cake?
The Summer We Found the Baby is a beautifully crafted story about family, loss, hope, and possibility in the midst of war. When I read it, I approached it without any expectations, by the time I finished it, I actually felt uplifted. I hope you do, too.
This book is is recommended for readers age 10+
This book was gratefully received from the publisher, Candlewick Press
Posted by Alex at 10:44 AM