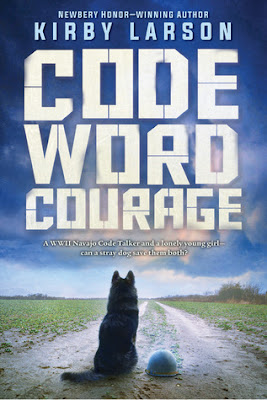 It's September 1944 and fifth grader Billie Packer is anxiously awaiting her big brother Leo's visit, the first one since he joined the Marines. There's so much she wants to talk to him about, like how to get Hazel to be her best friend again. But when Leo arrives, much to Billie's disappointment, he isn't alone, he's brought his buddy Denny, a Navaho, and an injured dog they found near the highway. It doesn't take long for Billie to get friendly with Denny, and to fall the dog, that Denny had named Bear.

Before Denny leaves, he tells Billie that he thinks Bear's purpose is to help her find what she is looking for. Soon, Leo ships out to the Pacific, Denny is recruited as a Navaho code talker, and Billie's life settles into a routine of school, chores, taking care of Bear, and hanging out with Tito, a Mexican boy in her class. Although Billie has been bullied by two boys in her class, their real target is Tito. When the bullying gets ugly and something happens to Tito, Billie finally realizes what she has been looking for, thanks to Bear. And thanks to Bear, in the middle of a battle, Denny also learns what is important to him.

Readers who have read any or all of the previous Dogs of War series, which includes Duke, Dash, and Liberty, will surely enjoy Code Name Courage. Readers new to this series will find that their is so much to learn about the home front in these novels. They are all so well-written, well-researched, and historically accurate. In the following interview, I asked Kirby Larson about her research, what inspires her and what she hopes readers will get from her books. 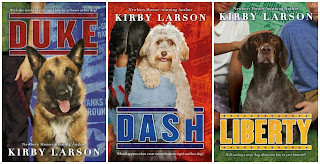 Did you always want to be a writer?

Though I have always loved reading and writing, I never knew writing was a career option until college; and then, it was journalism, which became my major.


Were you always partial to historical fiction? Why?

When my daughter was in 6th grade, she introduced me to the historical fiction of Karen Cushman (Catherine, Called Birdy) and Jennifer Armstrong (the Mary Meahan series). I fell in love with those books, wishing such rich treatments of history had been available when I was a kid. It wasn’t until I heard a snippet of my own family history, however, that I was drawn to writing historical fiction. That first foray turned out to be Hattie Big Sky and I haven’t looked back since.


Can you tell us something about your research process for your historical fiction novels?


Oh dear. What don’t I do during the research process?! I read every single first- hand account/primary document I can get my hands on, including recipes! I interview experts, and those who have lived through the time periods/experiences I’m writing about. For example, for Dash, I spoke to women who had been incarcerated in war relocation camps during WWII. And for my latest book, Code Word Courage, I read every Navajo Code Talker memoir published. I also interviewed a Code Talker, as well as the son of a Code Talker. I read old newspapers, read books published during the time periods I’m writing about, collect old maps, train timetables – you name it. I do whatever I need to do to feel confident I can recreate a slice of the past for today’s young readers.

I wonder, what were some interesting or surprising things you discovered during the research process for Code Word Courage and the other Dogs of War novels?

There are so many surprises – I’ll share a few. I was astonished to realize that normal American families loaned their pets to Uncle Sam during WWII (Duke); I was amazed to learn that, despite being sent to horrible, barren places, the incarcerees of Japanese descent created beauty with scraps of lumber, or found shells or greasewood branches (Dash); I was astonished and humbled to discover that 400 Navajo men helped to create a code based on the language they once had been punished for speaking (Code Word Courage).

Each of the Dogs of War stories feature a triangular relationship between a young person, their dog, and an older person. What inspired you decide to write a series of WWII stories where a dog is the catalyst for the strong bond that develops between the three of them?

The honest truth is that the first book written, Dash, (the second book published) was inspired by the love of one person for her dog. Once I had written that story, inspired by Mitsi Shiraishi, I knew each of the stories that followed would also involve a dog. It was one of those serendipitous gifts that writing can bestow.

In Code Word Courage, you tell both Billie and Denny’s stories in the first person. I can understand how you could write Billie’s story but I wonder what sources did you draw upon to get into the mind and heart of a Navaho Code Talker?

As I mentioned above, I read every single first-hand account, memoir, newspaper article, etc. to help me understand the factors that would have shaped the character I’m writing about. I also rely on my imagination and empathy to put myself in any character’s shoes. Though those who were part of WWII are diminishing in number, there are still a few veterans surviving. I was able to interview Dr. Roy O. Hawthorne, whose experiences as a Code Talker shaped the creation of Denny’s story. In addition, Michael Smith, son of Code Talker Samuel “Jesse” Smith Sr. read my manuscript for accuracy.

I laughed when I read Hobie Hanson, the main character in Duke, wore PF Flyers (my own personal sneaker choice). All of your Dogs of War stories (in fact, all your historical fiction) have this kind of authenticity to them without overwhelming readers with too many normal, but accurate details about what life was like for kids on the home front. How do you know when you’ve included enough realistic details?  And how do you decide on what to include, considering most of today’s readers may not be familiar with many of them?

I am so lucky to have a terrific first reader, and a terrific editor who kindly but firmly tell me when I am shoehorning in too many of the great facts I’ve learned about a past time and place. If it were left to me, I would share EVERY fascinating detail I uncover. But then my stories would read like history books and that’s not what I’m trying to create. As for deciding what to include, I have tremendous respect for my readers who, even if they might not understand every detail in a book, are smart enough to figure out the essence of each story.

What do you hope today’s readers will take away from your WWII stories?

One of my goals as a writer is to leave room for my readers to take away from each story what they need to take away. That being said, I wouldn’t be disappointed if my readers felt inspired to be kinder and more tolerant after reading one of my books.


I have really enjoyed reading all four of the Dogs of War stories. Will there be any more Dogs of War books?
I have learned never to say never but, at this point, I am ready to step away from WWII for a time. I am working on a novel with a slightly older main character (16) set in pre-crash 1929. After that, who knows?!

One last question - do you have a favorite dog story not written by Kirby Larson?
Oh my goodness. Must I choose only one??? I can’t, so, here are a few: Love that Dog (Sharon Creech); How to Steal a Dog, and Wish (Barbara O’Connor); and Because of Winn-Dixie (Kate Di Camillo). Books about dogs I haven’t yet read but are on my nightstand: Chasing Augustus (Kimberly Newton Fusco); Good Dog (Dan Gemeinhart) and Following Baxter (Barbara Kerley).


Thank you so much for this opportunity to talk about my passion – writing historical fiction for young readers. I am grateful for your interest.