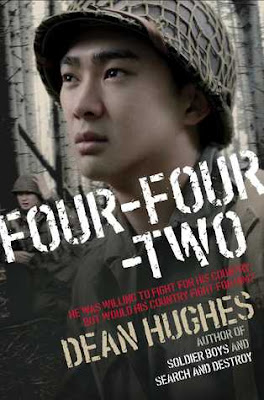 In December 1941, right after the Japanese attack on Pearl Harbor, Hawaii, high school student Yuki Nakahara witnessed his father, a California strawberry farmer, being arrested by the FBI as a Japanese spy and them tell his mother she is now an enemy alien.

Now, in April 1943, Yuki, his mother, younger brother Mick, and sisters Kay and May have all been living in the Central Utah Relocation Center, also known as Topaz. In fact, all west coast Japanese peoples, regardless of whether they were Nisei, born in the United States and whose parents were from Japan, or Issei, first generation Japanese immigrants, had been relocated to various internment camps around the country, as per Executive Order 9066 signed by President Roosevelt.

The United States mow needs more soldiers and are letting Japanese men enlist, as long as they swear allegiance to this country. Having just turned 18 years old, Yuki and his best friend Shigeo 'Shig' Omura have both decided to enlist, and despite the fact that the country he is going to defend is still holding his father prisoner. Yuki is determined to prove his loyalty to his country.

As part of the all Japanese 442nd Regimental Combat Team, Yuki and Shig find basic training hard and tough, but they are determined to prove themselves. Added to that, Japanese recruits find they are still facing the same racist attitudes from others in and around Camp Shelby, Mississippi, even though they are fighting for the same country. But then, basic training gave way to endless war games and Yuki thought they would never get a chance to fight. But, finally, in March 1944, the Four-Four-Two received their orders to ship out to Italy.

Although they had been anxious to get to the front, Yuki and Shig aren't really emotionally prepared for what they find in combat. Death and destruction surrounds them, friends are lost, and Yuki discovers that the enemy is now just a kid like he and Shig. He gets a small break from the fighting because of a very serious case of trench foot exacerbated by having to wear combat boots. But for Yuki, the hardest part of battle was still to come before he could find his way home.

I have to honest and say I don't care much for books where most of the action takes place on the battlefield, I am generally much more interested in the home front then the front lines. That said, I found Four-Four-Two to be a very interesting novel. Most books about Japanese internment during WWII are focused on the families living in those camps. Even when the young men enlist and go to war, the story stayed focused on the family at home.

But by focusing on two young Japanese American men who enlist in the army, author Dean Hughes is able to show that even though they were fighting on the same side as other Americans, they were still segregated into their own regiment, the 442nd. Men like Yuki and Shig had to constantly deal with racial prejudice both in the army and away from it. One telling example is the barber who refuses to cut "Jap hair" despite Yuki's uniform and the two medals he wore on the (a purple heart and a Silver Star for gallantry in action).

Hughes begins Four-Four-Two with a Preface that explains how some Americans saw German, Italian and Japanese immigrants at the start of the war, and why. Japanese immigrants were not allowed to become citizens, and Hughes goes on the give background into the treatment of Issei as 'enemy aliens', and includes details about the exemplary wartime performance of their sons who joined the 442nd Regimental Combat Team. Also included is a breakdown of military units for people like me, who can never keep them straight.

This is a book that should appeal to anyone interested in WWII, Japanese American history and I think they will find that parts of it unfortunately still resonates in today's world.

This book is recommended for readers age 13+
This book was an EARC received from Edelweiss/Above the Treeline
Posted by Alex at 8:11 AM