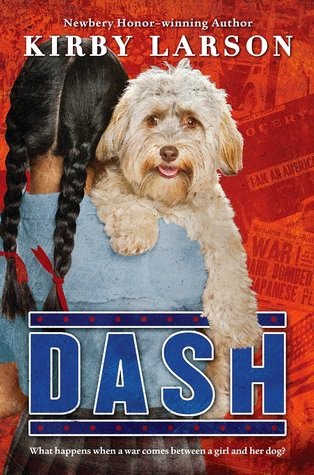 Last year, Kirby Larson introduced us to Hobie Hanson and his dog Duke.  Hobie somewhat reluctantly volunteered Duke to be part of the country's Dogs for Defense program.  This year, Larson introduces us to Mitsi Kashino and her dog Dash.

It's January 1942, one month after the bombing of Pearl Harbor.  So far, things haven't been very different for Mitsi, 11, and her family, Japanese Americans living in Seattle, Washington.  But on the first day back to school, after the Christmas holidays, all that suddenly changes.  First, Mitsi's two best friends aren't at their usual meeting place, and at school they give her a cold shoulder.  Other classmates also ignore her in class and at recess.  On the way home from school in the rain, she is surrounded by a group of high school boys, who trip her causing her to fall and who tear up and kick everything in her school bag into puddles.  Luckily, a new neighbor, Mrs. Bowker comes along and breaks it up.

Change becomes even more apparent.  Cameras and radios had to be turned into the government, some of the Japanese men are being taken away by the FBI and even Mitsi's grandmother, Obaachan, must register as an alien because she was born in Japan.  Getting to know Mrs. Bowker seems to be one part of Mitsi's life that is pleasant, that and the comfort of her beloved little dog Dash.

But then April comes and with it the news that the Kashino family, along with all the other Japanese American families living in Seattle are to be sent to an internment camp for the duration of the war.  Each family member can being just one suitcase.  Naturally, Mitsi assumes she can bring Dash with her, but when she finds out that no pets are allowed in the camp, she is devastated.  What can she do with Dash to keep him safe?  Knowing that Mrs. Bowker lives alone, and might want some company, Mitsi asks her if she would be willing to take care of Dash temporarily.  Luckily, kind-hearted Mrs. Bowker agrees.

Losing everything, including her dog and her two best friends was a hard blow for Mitsi.  Now, Mitsi and her family must adjust to their new life behind a barbed-wire fence, surrounded by soldiers with rifles watching their every move.  One bright spot for Mitsi are the wonderful letters she receives from Dash, telling her about life with Mrs. Bowker.  But even that isn't quite enough to pull Mitsi out of the depression she falls into.  But a new best friend just might do the trick.

I have always believed that every persons experience of World War II is similar but different from everyone else.  And each novel I read reflects that.  Dash is based on a true story and much of what Mitsi does is taken from that story, giving the novel its sense of reality.

Dash spends a lot of time what life was like between the bombing of Pearl Harbor and life in an internment camp.  It would seem that it took a while after the initial shock of the bombing on December 7, 1941 for people began to be aware of such anti-Japanese feelings that they could turn on old friends and neighbors so vehemently, as it did with Mitsi and the kids she went to school with.  In that respect, Larson gives the reader a good picture of what it was like.

Larson also gives a good depiction of the internment camps, which were really fit only for the horses many of them were meant to house, and life was always dirty and unpleasant.  She really conveys the sense of betrayal, loneliness and the fear of the family coming apart that Mitsi experiences on top of losing everything she has known her whole life.

I like the way Larson shows the reader that even in times of great distress and hardship, good things can happen and in the end this is a story about the strength of family, the value of true friendship and learning to appreciate what is really important.

Dash will be of special interest to anyone who is a dog lover, or has an interest in WWII history on the home front.