Hitler in Paris: How a Photograph Shocked a World at War by Don Nardo 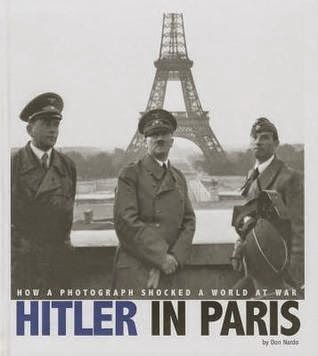 Even before he seized power and became the chancellor of Germany in 1933, Hitler had done two things that most people seeking political office rarely did at that time - first was that he used a private plane with his own pilot to campaign quickly all over Germany.  The plane was so much faster than a train or car, and much less tiring.  The second thing he did was to have a personal photographer to record his every move.  That photographer was Heinrich Hoffmann.

You probably know, if only from reading The Extra by Kathryn Lasky, that Leni Riefenstahl made several propaganda films, but her most famous film of all was Triumph of the Will (Triumph des Willens) documenting the 1934 Nuremberg Rally and showcasing Hitler.  She was a talented and innovative filmmaker, and a good friend of Hitler's (despite later denials of not knowing anything about was was happening in Nazi Germany and the occupied countries), but for still photography, it was Heinrich Hoffmann that Hitler wanted.

Hoffman was a very talented photographer, who loved to take pictures of people in moments when their guard was down, and recording their spontaneous actions/reactions.  But he was also gifted at the posed photograph and the iconic June 1940 photograph he took of Hitler standing in front of the Eiffel Tower, flanked on one side by Albert Speer and on the other by Arno Breker, is the one that Don Nardo has chosen to focus on in his book Hitler in Paris.  It is this photograph that best represents Hitler's dominance in Europe.  Standing at the Eiffel Tower, in a now defeated France, and with conquered countries to the North, South and East of France, Hitler's sights are now to the West and Britain.  One can only imagine how people must have felt when they saw this photo.  But what brought Hitler and Hoffmann to this point?

Nardo gives the reader a parallel history of each man early life - both middle class, but with very different family circumstances.  Events in Hitler's early life, a cruel father with whom he often fought, held feed his anger and hate at those more fortunate, and was later spurred on and fueled by Germany's defeat in World War I, for which he desperately wanted to seek revenge.

Hoffmann, by contrast, was taken under his father's wing and taught the art of photography.  Nardo describes Hoffmann as a very likable man, who claimed (like Riefenstahl) that he was not political, his relationship with Hitler was strictly personal and he had no knowledge of what was happening around him.  Eva Braun worked in his photography studio and it was Hoffmann who introduced her to Hitler (you may recall that from reading Prisoner of Night and Fog by Anne Blankman).

This is a short, 64 page book that is filled with information and photographs, all taken by Hoffmann.
Nardo has done a pretty good job at presenting these two men with objectivity and allowing the reader to draw their own conclusions about them and the circumstances depicted in the book.

Nardo also used lots of primary and secondary sources to write Hitler in Paris, giving the book a real sense of time an place, as well bringing these two controversial figures to life.  Additionally, he has included a useful timeline, a glossary, a list of additional resources, source notes and a selected bibliography.  There are also copious photographs of Hoffmann's, which are all now in the public domain.

Hitler in Paris: How a Photograph Shocked a Word at War will probably have great appeal to history buffs interested in the 20th century, WWII, and/or Nazi Germany.  But it will also appeal to serious serious budding photographers and even to those who are more experienced as a study in how one emblematic photograph can convey so much.