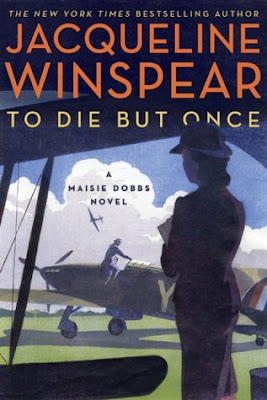 It's May 1940 and, while Britain is at war with Germany, nothing much has happened so far on the home front, except lots of talk about the possibility of England being invaded, and continued preparations for the war. But now that the so-called phony war has ended, things are heating up.

For 15 year-old Joe Coombes, already an apprentice for Yates and Sons, painters and decorators, it now means a job painting the buildings at every RAF airfield in the country with a special new fire-retardant paint. But the vapors from the paint give Joe headaches, and when he is found dead from an apparent fall, it's all chalked up to being a suicide rather than the fatal blow on the head he received from the two men following him as Joe was out walking one night (NOT a spoiler - it happens in the Prologue).

Joe's parents, owners of a local pub, ask Maisie to investigate what happened to their son, and Maisie readily accepts, having watched all the Coombes children, Joe, Archie, and Vivian, grow up in their close-knit family. The family has always been well provided for, but now, with the war finally beginning to heat up, Maisie notices that both Archie and Vivian are living better than most people, always wearing fashionable clothing, having nice living conditions, and even smoking expensive cigarettes from packs of 20 instead of cheap Woodbines, "sold by the one's and two's" and not even bothering to finish them.

Luckily, Maisie still has gas coupons, so she drives several times down to Hampshire with her assistant Billy Beale, the last known area Joe had worked in, and begins questioning everyone who had contact with Joe, including his fellow workers, his landlady and the air force. Everyone liked Joe, but no one can help much. And Maisie notices that she is now being followed by a car with darkened windows, all the way back to London.

Meanwhile, Maisie's best friend Priscilla Partridge has been having a problem with her middle son, Tim, ever since his older brother joined the RAF. Tim also wants to be involved in doing work for the war effort, but is still too young. She asks Maisie is Tim might visit Chelstone, Maisie's country home inherited from her deceased husband. The hope is that Maisie can talk to him, her father will keep him busy with farm chores, and her young evacuee Anna, 5, will be thrilled to have him there as she recovers from measles.

The war in Europe isn't going well for the British and French, and they soon learn that the British Expeditionary Forces (BEF) are being driven to the coast of Dunkirk by the German Army and are basically sitting ducks for the Luftwaffe. But when a call goes out for any craft that can cross the English Channel in an attempt to rescue the stranded soldiers, Tim and his friend Gordon Sanderson suddenly go missing as does one of Mr. Sanderson's boats.

As if the death of Joe Coombes and the possibility that Tim went to Dunkirk as part of the rescue flotilla isn't enough, Maisie has also decided to begin looking into the possibility of adopting Anna, though things don't look good for her as a single woman.

And just how does that nice man living in the same building as Maisie's office fit into the plot?

I really enjoyed this Maisie Dobbs mystery. There is lots of interesting every day information about life on the home front included as the Germans get closer and closer to the English Channel and the possibility of invasion become real. Invasion was something people really worried about during WWII, with good reason, considering the number of countries Hitler had already invaded. On top of that, there is worry about the sons who have already enlisted and are fighting in France - Billy's son Billy Jr. in the army, Tom Partridge flying in the RAF, both boys Maisie is quite fond of.

I found the mystery interesting and there were quite a few surprises I don't see coming - which I like in novel. And the subplot of the missing Tim allows Winspear to include a lot of information about events in the spring of 1940, just before the Battle of Britain began.

And as much as I loved reading the three Maisie Dobbs novels that take place just before and during WWII, and plan to read any future mysteries of hers in this time period, this novel made me realize that I don't much care for Maisie's character. I find she is too perfect and that she has too much of a flat affect - she never gets angry, or has a good laugh, or a good cry. Sometimes, when she thinks about her late husband and the child she lost, there is a sense of tearless sadness, or when she is with Anna a kind of motherliness about her, but even at that, I don't get a feeling of warmth. Odd that, to like the books in a series so much, but not the main character. Even odder, it doesn't spoil the novels for me at all.

What I did find interesting, and you may as well, is that the the story of young Joe Coombes is based in part on Winspear's father's WWII experiences as an apprentice painting building at military airfields with a new fire retardant emulsion. You can read what Winspear writes about this on her website HERE.

I hope you enjoy this book as much as I did, and I can't wait to see what Maisie's next novel will bring.

This book is recommend for readers age 14+
This book was an EARC received from EdelweissPlus
Posted by Alex at 11:58 AM