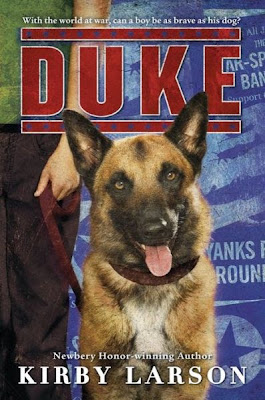 It is January 1, 1944 - a new year and Hobie Hanson, 11, thought he was doing everything a kid his age could do for the war effort.  He collected scrape; he spent 10¢ on a 'savings stamp' every week to put in his Victory book; he had watched his father go to war, flying B-24's in Europe; and now he had to say good bye to his best friend Scooter, whose father was needed at the Portland shipyard.  So Hobie wasn't too happy when his neighbor Mr. Gilbert told him that his nephew had just donated his dog to the military's Dogs for Defense program and they sure could use a well trained dog like Duke, Hobie's German Shepard.  But give up Duke?  Never!

Not even when his favorite radio show, Hop Harrigan, talks about kids who have given their dogs  to Dogs for Defense to help win the war.  How could Hobie ever seriously consider giving up Duke?

When Hobie gets back to school after Christmas break, there discovers a new boy sitting at Scooter's desk.  His name is Max Klein and the class bully, Mitch Mitchell, immediately starts picking on him because of his German name.  Hobie just stood there and watched, wanting to avoid Mitch's meanness.  But, later that day, it is Hobie's turn to get bullied after Mitch takes his bike.  Only this time, he has Duke with him, who doesn't hesitate to go to Hobie's defense (no, Duke doesn't hurt Mitch).  Impressed by what he sees, a man walking a Doberman, asks Hobie if he would be willing to donate Duke to Dogs for Defense, of which he, Olin Rasmussen, is regional director.  Undaunted, as bullies often are,  Mitch later tells Hobie he doesn't have what it takes to give up his beloved dog.

Challenged by Mitch, remembering his father's words about doing what needs to be done while he is gone, but feeling somewhat less heroic that the other Hanson men in his family, Hobie makes the big decision and before he knows it, Duke has left for basic training in the Dogs for Defense program.

Can he stick to his decision even after he learns that Duke is being trained for combat?

At first, I didn't care much for Hobie, but he grew on me.  Duke is a story about bravery, and what that means for Hobie and by I finished the book, I realized that I liked the fact that Hobie's courage isn't perfect.  He has conflicting feelings about what he has done and changes his mind about volunteering Duke to Dogs for Defense over and over, even trying to get him back.  Hobie's is a very understandable wavering we can all relate to.

Like all good writers, Kirby Larson has done a lot of research to give Duke a sense of home front reality.  As she says in her Author's Note, she doe not write books about war, she writes about people dealing with tough times, like war.  Not only are her home front depictions believable, but Larson has also glimpse into the world of soldiers and their dogs, through the letter Duke's soldier, Pfc. Marvin Corff wrote to Hobie.

I am always up for a good home front story about kids and how they coped in WWII, and Duke did not disappoint.

If you are interested in reading more about the Dogs for Defense program, you can read a short history about it HERE

Never heard of Hop Harrigan, America's Ace of the Airways, Hobie's radio hero?  Well, neither have I.     He wasn't very popular as a comic strip in the newspaper, but he did last for a number of years on the radio, where his sponsor was Grape Nuts. 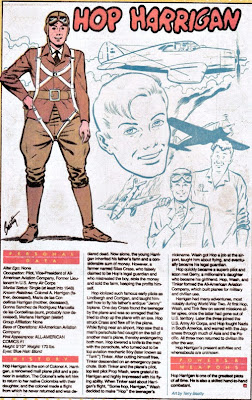