Ruby in the Ruins written and illustrated by Shirley Hughes 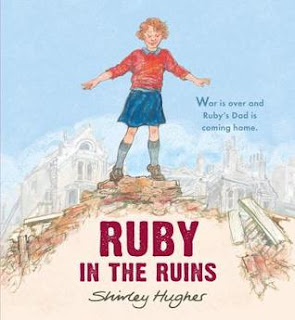 I mentioned in my review of Voices from the Second World War that writer/artist Shirley Hughes was one of the people who contributed her wartime experiences to that excellent collection of oral histories, and that she had also written a book based on them (see Whistling in the Dark).

Ruby in the Ruins is Hughes' latest picture book, one that takes place just at the end of WWII. Everyone in Ruby's London neighborhood is celebrating the end of the war with block parties, including Ruby and her Mum.

But, though the fighting may have ended, the memory of the Blitz is still fresh in their minds. There were all those nights when the air raid sirens went off, and people were supposed to go to their nearest shelter. And kids had been sent out of London for safety, but Ruby and her Mum stayed - just in case her dad, who is in the army, got leave and could come home to visit for a visit. 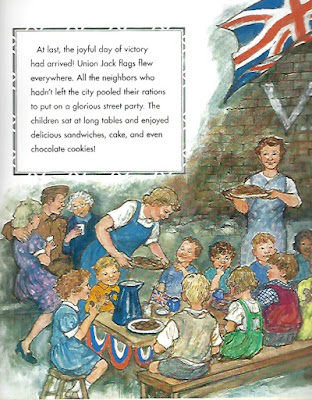 Those scary days and nights may be in the past, but all around her, Ruby sees houses had been bombed and blackened, and now they were fenced off piles of rubble that need to be cleared up. And while Ruby's friends have already welcomed their dads home from the war, she and her mum have to wait a long time for her dad.

When Ruby's dad finally does come home, Mum welcomes him with open arms, but Ruby doesn't know what to say to him. And besides that, now everything has changed. Ruby sleeps in the small attic room instead of with Mum, and  has forgotten that her tall dad takes up lots of space. Not only that, but she continues to feel rather shy around him. 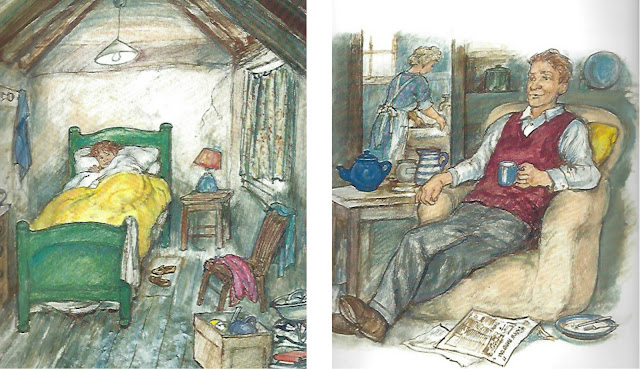 But when her Mum allows Ruby to go off with two neighbor boys that she knows, they decide to explore the fenced off ruins of some bombed out buildings. When an accident happens, it proves to be just the catalyst that helps Ruby overcome her resentment and shyness towards her dad. 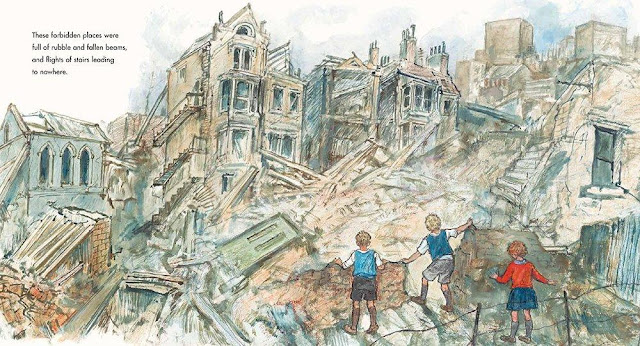 The detailed illustrations are done in ink, watercolor, and gouache, and, because Hughes has drawn them from her own memory of the war, have a real air of authenticity about them. The bombing damage to London's buildings was extensive and the fascination of playing in the rubble must have been irresistible for kids at that time, just as Hughes depicts, but also dangerous.

Ruby in the Ruins is a charming story with a pleasing ending, but it never become sugary sweet. What it does do, as Shirley Hughes always does so well, it look at the end of the war from the point of view of a child who world suddenly changes. The war is over, its no longer just Ruby and her Mum, and she experiences an expectable awkwardness when her Dad returns after being has been gone for such a long period of time. Post war picture books are in short supply, and I can't recommend this one enough.

This book is recommended for readers age 5+
This book was provided to me by the publisher, Candlewick Press
Posted by Alex at 12:04 PM