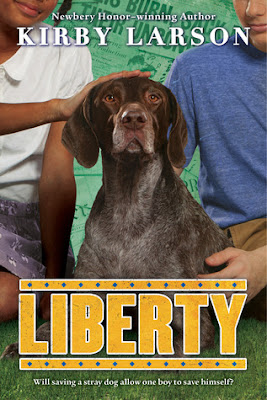 It's 1944 and Fish Elliot and his sister Mo have moved to New Orleans from Seattle while their dad is overseas fighting in the war.  Now, Mo is working for Higgins Industries, manufacturer of LCVPs (or Landing Craft, Vehicle, Personnel), and spending time with her new boyfriend, Roy.

Fish, who had contracted polio when he was younger that left him with a weakened leg, loves to tinker and invent things.  While working on a trap to catch whatever is eating up his neighbor Miss Zona's Victory Garden, with unwelcome help from her granddaughter Olympia, Fish finds a mangy stray dog.  After a mean neighbor, Mr. LaVasche, threatens to shoot the dog for bothering his chickens, Fish decides to keep it, naming the dog Liberty in his head.  But Liberty is a skittish dog and keeps running off.

Life in New Orleans settles into a daily routine for Fish. School, chores, inventing, visits from Olympia and looking for Liberty fill his days, as does trying to build his weak leg up again using one of his own inventions and riding a bike, despite the pain and difficulty.  Fish is convinced that his father is disappointed in him because of the polio and just wants to be strong for him when he returns from the war.

One day, Fish comes home and finds a badly wounded Liberty under their oak tree, waiting for him.
He tends to the gash on her side with help from Olympia and Miss Zona, and actually manages to convince his sister to let him keep Liberty, outside only though. Unfortunately, it turns out that Liberty is deathly afraid of thunderstorms and runs away again when one begins. When he finally finds her weeks later, she is pregnant and being held captive in a very small cage, and Fish soon learns that Liberty's life may once more be in jeopardy thanks to Mr. LaVasche.

Sandwiched in between what is happening in Fish's life is the story of a young German soldier named Erich Berger, 17, who has a younger brother back in Germany who also has had to deal with polio. When a bomb hits his camp, Erich is captured by the Americans and becomes a prison of war.  It doesn't take long for him to realize that life as a POW is better under the Americans than as a German soldier. Eventually, Erich makes his way to a POW camp in New Orleans.  When he sees Fish trying to release the now caged Liberty, he is reminded of his own brother and decides to help, even if it means putting himself in jeopardy.

Liberty is the third book in Kirby Larson's Dogs of War series. The first one was Duke, the story of a boy who gives up his dog to the Dogs for Defense program; the second book was Dash, about a young Japanese America girl who must give up her dog when her family is sent to an internment camp.

Like the first two books, the main story is focused on life on the home front during WWII. One of the things I really like about reading a book by Kirby Larson is that the reader gets such a clear picture of what life was like at the time in which the story is set.  It is all done is such a natural way that the reader finishes reading with a lot more information plus a really good story.  For instance, I know what an LCVP is, but had never heard of Higgins Industries and its owner, Andrew Jackson Higgins. Larson gives enough information about this important wartime company, but inspired me to look it up anyway. This photo shows the work being done exactly as Mo describes building of LCVPs in the book:

Fish is a great character.  Somewhat naive, he is also strong, imaginative, inventive and kind.  Polio was a common disease back then (see my review of Blue by Joyce Moyer Hostetter for another protagonist who contracts polio), and he works hard to overcome his disability.

For all Fish's complaining about Olympia annoying him, he really does like her.  Olympia is African American and Fish seems to not really know or understand about Jim Crow laws, treating her like he would anyone else.  But when he (and the reader) witnesses some of the treatment she and her friends are forced to deal with, Fish begins to understand life in the south a little better, but he still doesn't let that prejudice influence his friendship with her and her grandmother.

Kirby Larson is a master at writing historical fiction and Liberty is no exception.  I highly recommend this and the other two books in the Dogs of War series.  All three focus on important themes of bravery, courage, friendship, tolerance and prejudice, and kindness under difficult circumstances. Plus they are engaging and well written.

This book is recommended for readers age 9+
This book was sent to me by the publisher, Scholastic Press
Posted by Alex at 8:20 AM