The Shepherd by Frederick Forsyth 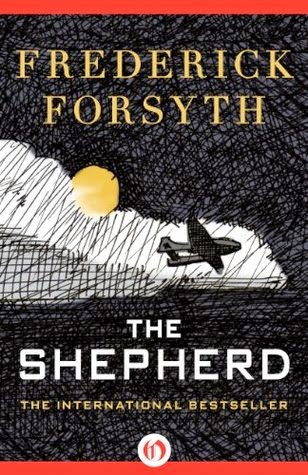 It's Christmas Eve, 1957, and a 20 year old pilot has just climbed into the cockpit of his Vampire jet fighter, taking off from an RAF air base in Germany to return to England and home in time for Christmas day.

But ten minutes after taking off, over the North Sea, the pilot runs into his first bit of trouble - the jet's compass is not longer working.  Before long, the jet suffers a complete electrical failure and the young pilot needs to call up every bit of emergency information he had received while still in training.

Before long, the pilot is completely lost in the fog over the North Sea and beginning to run out of fuel.   Bailing out isn't an option - the fighter jet just isn't made for that and it would most likely mean instant death.  Not far from the Norfolk coast, he decides to use a last resort technique - flying triangles in the hope that the odd behavior would be noticed and bring out a rescue plane that could bring the Vampire down safely.

The triangular pattern works, and suddenly, a pilot in an old World War II de Havilland Mosquito fighter with the initials JK on the side is signaling that he understands the problem and will shepherd the Vampire to safety.  Shepherding is when the rescue aircraft flies wing-tip to wing-tip with the disabled plane.

The Mosquito shepherds the Vampire slowly into the descent.  By now, the Vampire had pretty much run out of fuel.  Suddenly, "without warning, the shepherd pointed a single forefinger at me, then forward through the windscreen.  It meant, 'There you are, fly on and land.'"  At first, the pilot sees nothing.  Then, the blur of two parallel lines of lights become visible in the fog.  The pilot is able to safely land his Vampire.

After being rescued and brought back to RAF Station Minton, now just a supply depot run by the elderly WWII Flight Lieutenant Marks, things begin to get odd.  To begin with, Marks can't imagine how the young pilot found his way to the runway on this now preactically deserted base that had been a thriving hub of RAF pilots and planes during WWII.  And, the young pilot doesn't seem to be able to find anyone who knows anything about the pilot in the mosquito who had shepherded him to safety.  The whole story begins to become more and more sinister until the young pilot notices an old WWII picture in a room and recognizes the pilot in it standing by his Mosquito with the same JK initials. 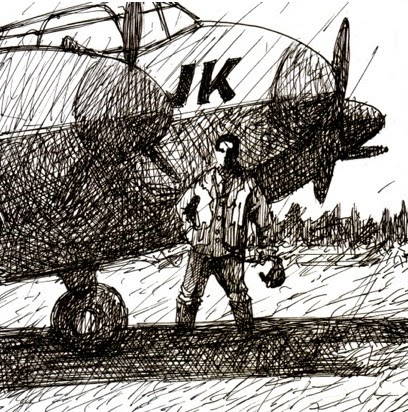 But, who is the mysterious shepherd who brought a young pilot to safety on Christmas Eve 1957?

The Shepherd is a short, 144 page novella written in 1975 by Frederick Forsyth, author of novels like The Day of the Jackal and The Odessa File.  It is said he wrote The Shepherd for Christmas as a present for his wife.

This tightly written illustrated story is perfect for Christmas Eve, with its message of hope.

Every year, the Canadian Broadcasting Corporation broadcasts a reading of The Shepherd by Alan Maitland on CBC Radio One.  Maitland passed away in 1999, but recordings of him reading The Shepherd are available, like this wonderful 32 minute reading.

This is my World War II book for my 2014 War Challenge with a Twist hosted by War Through the Genreations
Posted by Alex at 11:02 AM