From the Archives #10: Strangers at the Farm School by Josephine Elder 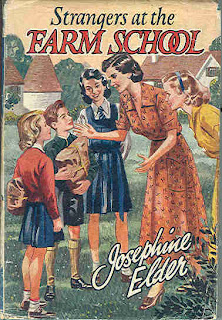 Last December, Charlotte over at Charlotte's Library reviewed a book by Josephine Elder called Erica wins Through, reminding me of a book I have by the same author stuck away in my bookshelves. The other day I dug out my copy of Strangers at the Farm School by Josephine Elder and reread it.

This is the third and last installment of Elder’s Farm School books. The Farm School is a very unconventional school, in which a student may pursue the things they are really interested in, besides their academic subjects. Students must also help with the running of the farm part of the school with chores like caring for animals or working in the fields.

The story opens in September 1938, just as the new term is starting. The school is expecting two Jewish refugee children from Germany, brother and sister Hans and Johanna Schiff. Their father, a successful lawyer, was arrested by the Gestapo and placed in a concentration camp, their mother remained in Germany to try to obtain his release, their friends were forbidden to have anything to do with them and they were no longer allowed to attend school. So their mother sends them to England as part of what appears to be the Kindertransport program.

On arrival in London, they are taken to a center where they are given clothing to wear. They are appalled that the items are used, accustomed as they were to much finer clothing. Then they were hustled to a train and journeye to Sutton Malherbe, the village where the Farm School is located. Mrs. Forrester, who along with her husband, owns and runs the Farm School, welcomes them with open arms, but the children are a bit distant because of their recent experiences in Germany.

The next day is a busy one, with new arrivals, dormitory assignments and exploring the farm. Johanna is happy to learn she may be able to help take care of some calves, but Hans becomes quite indignant when told he could help with the pigs. The other kids don’t understand his attitude until he explains that to a Jew, a pig is an unclean animal. But Hans is also angry and insulted that they are expected to do any kind of work usual to a farm, feeling he is above that kind of labor.

Johanna quickly adjusts to life at the farm school, and particularly enjoys doing the farm work that is expected of her. She gets along with the other girls, even developing a GP (Grand Pash or crush) on Annis Beck, herself a senior student and the school president. But, remembering how things were in Germany, she never lets herself get very friendly with the other kids, despite her loneliness. She is very thrilled when she is asked if she would like to play field hockey, since playing games in Germany had been forbidden for Jews.

At first, Hans does not make even this much adjustment. He cannot get past his anger at the English, who were Germany’s enemy in World War I and responsible for the death of his uncle and wounding of his father. While out walking with Johanna, and airing his grievances, the pair comes across some Gypsies harvesting the hops fields. The Gypsies are very friendly and it eventually comes out that they have also been to Germany and plan on returning. One of the woman in a caravan gives them a charm before they leave, telling them that as long as they are friends with gypsies, the charm will bring them good luck. Though seen by Annis returning to school, they deny having gone to see the gypsies. That night, both children wake up in the night very sick and are asked to they ate any little green apples. Thinking about the charm, they say no, even though they had been given some apples by the Gypsies. Hans is convinced the English have tried to poison them and makes plans to go back to Germany with the Gypsies. But they don’t get far before they are soon found by a search party from school.

As the school year goes forward, even Hans begins to adjust as much as he can. He discoveres that Annis is working with the school bee hives and asks if he can work with them too. This work excites him for the first time. He never really makes friends at the school, nor does he seem to want to, but Johanna does eventually find a girl her own age to be friends with. There is even a happy ending for Hans and Johanna, in fact for all the characters.

Hans and Johanna are only one story thread running through this novel. The reader also follows the story of Dan as he tries to overcome his deep fear of horses and riding; of Annis as she learns to drive in case there is a war; and of Kitty Forrester, Annis’ best friend and daughter of the school owners as she embarks on her chosen path in life. All of the characters are drawn well and well-rounded.

Though old, this is not a difficult book to get hold of and it does give a good picture of life and attitudes in pre-war Britain and Germany, for example, the Gypsies are referred to as gippos, which was a common derogatory term for them, and the description of the humiliation of Herr Schiff and other men by ordinary Germans before being sent to a concentration camp is disturbingly realistic.  I would definitely recommend Strangers at the Farm School to anyone interested in this historical period.

The Kindertransport that appears to have brought Hans and Johanna to England was a rescue operation which saved the lives of 10,000 Jewish children. The children were sent to England by their parents from 1938-1939, most arriving at Liverpool Street Station, just as Hans and Johanna did. From there they were placed in forster homes and schools. Though what is described in the book resembles the Kindertransport operation, it is never called that and in fact, transports didn’t begin until December 1938 not September 1938, the date of the novel’s opening. Nevertheless, Elder seems to have gotten her facts otherwise correct.

Below is a statue commemorating the Kindertransport program at the Liverpool Street Station in London, sculpted by Frank Meisler: 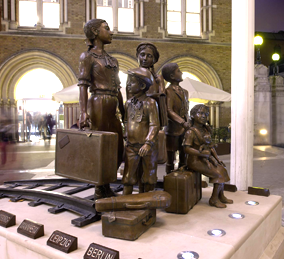