The Dragonfly Pool by Eva Ibbotson 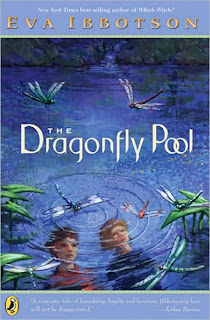 Eva Ibbotson was an unusual writer. She didn’t begin publishing children’s books until she was 50 and, she didn’t publish The Dragonfly Pool until she was 83. In addition, because of her own unhappy childhood, she had penchant for happy endings.

Yet, when I first began reading The Dragonfly Pool, I didn’t think I would like it. But I was wrong. The story begins in London, in the spring of 1939. Everyone is preparing for the expected war, and the Hamilton household is no different. Tally Hamilton has received a scholarship to a boarding school in the countryside. She doesn’t really want to go and leave her friends and her family, her dad Dr. Hamilton and her two aunts May and Hester.

Tally is quite pleased, however, when she reaches the school, Delderton, to find it is nothing at all like the schools she has read about in books, rather it is a progressive school where students can pursue their interests. Tally quickly settles in and makes friends with the other students, particularly with Julia.

One Saturday, while at the movies with Julia, Tally sees a newsreel about a small country in Europe named Bergania, whose king is trying to hold out against Hitler who wants to use the small country to his advantage. Tally immediately feels herself drawn to this country, particularly the young boy who is the king’s son.

Later, she school receives an invitation from Bergania to participate in a dance festival it is holding. Tally manages to convince the school to participate in the dance festival as a show of support to the small country. The Deldertonian kids make up a dance, and travel to Bergania. One day, while out walking around, Tally meets the Prince of Bergania, Karil, and together they go exploring the forest that surrounds the town. There they come across a pool of water, the Dragonfly Pool, a favorite place of Karil and his father. Karil asks Tally why they had come to Bergania and she tells him about the newsreel. She thought the King was strong and brave to hold out against Hitler’s pressure and she wanted to come as a show of support. Tally and Karil become instant friends.

As it happens, one of their escorts, science teacher Matteo, was once a very good boyhood friend of the King, but had long ago parted ways over a disagreement. On the day of the dance festival, the King and Prince Karil, ride into the center of town, and just as the King is opening to festival he is shot dead by people hired by the Gestapo. Before dying, the King asks Matteo to look after his son.

The real adventure begins when it is time to leave Bergania and the students, led by Tally, must try to sneak Karil back to England with them because the Gestapo men want to take him into their custody and send him to Colditz, a castle in Leipzig used by the Nazis as a POW prison.

After successfully getting Karil to England, and it is a very exciting part of the book not to be missed, he and Tally both assume he will now be a student in Delderton. But that is not to be. Instead, he is taken by his dreaded and dreadful nursemaid the Countess Frederica, nicknamed the Scold by Karil, to the large, but shabby London home of his grandfather, the Duke of Rottingdene. It seems no one has any money in the Prince’s family, including himself, but they still live like they do.

Will the prince ever succeed in being able to attend Delderton and be with the only friends he has ever had?

This was an exciting, adventurous novel, based on real events with the exception of Bergania. Bergania is an imaginary country in the center of Europe, making The Dragonfly Pool a true Ruritanian tale. And although the story is a wonderfully delightful blending of fact and fiction, the characters are quite well rounded and realistic, though I can’t say that about the school or the country of Bergania. Bergania reminded me a bit of Genovia from The Princes Diaries having that same kind of fairytale feeling to it. And of course, Delderton did remind me of Hogwarts without the magic and the internal enemies.

Consequently, this is a book that should be read in the same spirit as Harry Potter. It should really not be missed, especially if you are a fan of Eva Ibbotson. And because it is written by Eva Ibbotson, you know in advance there will be a happy ending, so the joy is in the journey getting there.

This book is recommended for readers ages 8 and up.
This book was borrowed from the 67th Street Branch of the NYPL.

Eva Ibbotson passed away last October at the age of 85. You may read her obituary at the following site:
http://www.guardian.co.uk/books/2010/oct/24/eva-ibbotson-obituary
Posted by Alex Baugh at 8:17 AM