'If you ask folks around here what they remember about the year 1944,
A child might say, "That was the year my daddy went off to fight Hitler."
A mother might look off towards Bakers Mountain and whisper that
polio snatched up one of her young'uns.
And the Hickory Daily Record will say that my hometown gave
birth to a miracle.' (pg9) 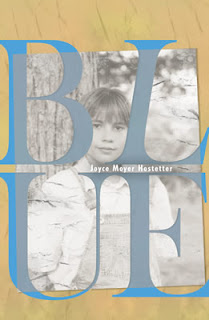 It is January 1944.  Everyone in is focused on the war, including Ann Fay Honeycutt’s family, especially now that her father is off to war to fight Hitler.  But even though he is the one going away, 13 year old Ann Fay feels like this moment is the beginning of a journey for her too.  Her journey begins when her father gives Ann Fay a pair of overalls and tells her that while he is gone, she needs to be the man of the house.  This means planting the victory garden with the help of Junior Bledsoe, a neighbor’s son.  It also means looking after her 6 year old twin sisters, Ida and Ellie and her brother Bobby, 4.  He tells Bobby to help out, but to make sure he plays everyday.

Things go well until the middle of June 1944.  Suddenly, everybody’s focus in is no longer on the war, but has shifted to their own small county – 12 cases of polio have been diagnosed in and the number is steadily climbing.  Because was hardest hit by this polio epidemic, a makeshift hospital was constructed in three days on the site of a health camp that had closed due to polio.  This became famously known as the Hickory Emergency Infantile Paralysis Hospital.  Not long after the epidemic is announced, Bobby is also diagnosed with polio.  He is rushed to the hospital in a hearse because there were no ambulances available due to the war and the epidemic.  A few days later, Ann Fay and the girls are visited by the public health nurse and an epidemiologist from Yale who inspect their home, put them under quarantine and tell Ann Fay that she must burn all of Bobby’s belongings, including his toys and drawings, a task that requires all the courage she can muster.

Bobby remains at the hospital, breathing with the help of an iron lung. His mother works in the kitchen so she can stay near him. But in August 1944, Bobby succumbs to the disease. He is brought home and buried on the family farm. Care of the house, the twins, and the garden had rested on Ann Fay’s shoulders the whole time Bobby was hospitalized. Now she must continue to do this and, in addition, take care of her mother who has slipped into a serious depression.

In September 1944, Ann Fay is stricken with polio too. She is taken to the same hospital that her brother went to. There she meets Imogene Wilfong, a black girl in the bed next to her. Ann Fay, despite everything that has happened, is shocked when Imogene tries to be friendly:


“I reckon she thought we was going to be friends. But I hadn’t ever been that close to a colored before. I sure hadn’t thought about making friends with one. Instead of telling her my name, I looked away.” (pg. 122)

Over the course of their treatments, the girls finally do become close friends. The hospital has accepted polio victims regardless of race or economic circumstances, and even though it was in the Jim Crow south, they were not segregated. But that changes when the emergency hospital closes in March 1945 and the girls are moved to Charlotte Memorial Hospital. Because they were together in Hickory, they assume that they will be in Charlotte too. But when they arrive, Ann Fay goes in one direction into a building; Imogene goes in another into the tents set up for “colored.”

Ann Fay’s journey makes this is truly a coming of age story. It seems that Ann Fay’s life consists of one struggle after another, but like the hickory tree that Hickory NC is named after, she is also strong and doesn’t break easily, even after polio strikes. She meets these struggles with a determined practicality unusual for such a young person, but adversity has a way of maturing a person and so that makes her a very believable character.

What I really liked about this book in the factual information about polio that is so nicely woven into the story of Ann Fay Honeycutt. Polio had taken a backseat to the war. And even though President Roosevelt had been stricken with the disease, it was largely hidden from public view in his photographs. Since the epidemic changes the lives of all the characters, it is an opportunity to inform the reader. I asked my 22 year old what she knew about polio, Sister Kenny, iron lungs. The answer was “not much.” Kids don’t learn this in school anymore and certainly don’t have any real life experience of polio. I love well researched historical fiction and this is about as good as that gets.

Secondary to that, I liked that Hostetter also brought out the fact that there were other problems to deal with on the American home front besides the war and the difficulties related to it.

I enjoyed Blue so much that as soon as I finished, and I read it in one day because I couldn’t put it down, I went to the library and checked out the sequel Comfort. I am looking forward to reading the continuing story of Ann Fay Honeycutt and her family and neighbors this week.

This book is recommended for readers aged 9-12 years old, though if perfectly suitable for older readers.
This book was borrowed from the 67th Street Branch of the New York Public Library.

Below are two photos of the Hickory Emergency Infantile Paralysis Hospital with links to their websites for more information on polio:

“They took me to a tent with a screen door and a sign on the outside that said Admission Tent.” (Pg 119) 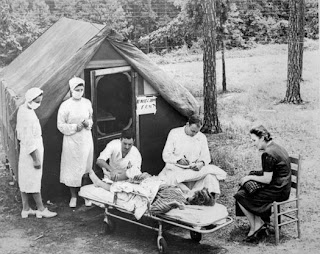 
“I started looking around and seen that the tent was mostly just the roof of that place I was in.  There was a wood floor and wood going about four feet up the walls...” (Pg 121) 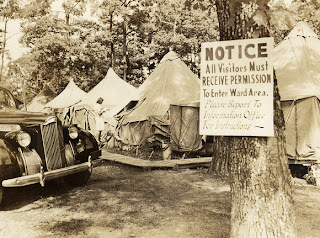 Whatever Happened to Polio?