The Children We Remember by Chana Byers Abells 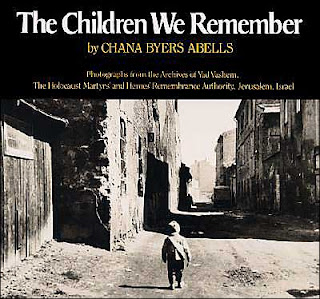 This week is Holocaust Remembrance Week, a time for remembering the victims of the Holocaust, and especially the 1.5 million children who perished. There are many good books about the Holocaust for young readers and today I have chosen The Children We Remember by Chana Byers Abells.

Using photographs from the archives of Yad Vashem and an absolute minimum amount of text, Ms. Abells has created a picture book based on photographs arranged chronologically as a way of creating a story about what happened to Europe's children before, during and after the Holocaust.

She begins even before the Nazis came to power, showing photos of Jewish children engaged in daily activities similar to what any child would be doing, and not very different from what children still do everyday – learning in school, praying in synagogue, playing with friends.

When the Nazis come to power, the photos take a turn, showing how life had changed for Jewish children – now they are dressed in clothing bearing a yellow star, their schools are closing, and their synagogues are being burned, they are no longer allowed to play.

It is a simple but powerful book that still manages to end on a note of hope.

In a New York Times article, Ms. Abells described how the book took its form while she was working in the archives of Yad Vasherm:

“She found herself setting some pictures of children aside. ‘I laid them out one night after work. It was almost as if the pictures told me a story, which I put together in the hope, I think, that someone would want to use the material. Then, I guess, I looked at the pictures and began to write little titles that described the pictures. I wanted the words to reflect the pictures, not the other way around.’”  (September 8, 1986)

The photographs chosen for this book are not so terribly graphic that they would frighten children, in fact, that was intentionally avoided. Each photo is of a different child, yet they as well as the reader are tied together by the text.  The book makes clear the very real and very scary implication being that without out vigilance, the Holocaust could happen again – to anyone but that might not be apparent to younger readers.  In a classroom, it is an excellent way to begin a discussion of present day instances of genocide.

Yad Vashem, the Holocaust Martyrs’ and Hereos’ Remembrance Authority located in Jerusalem, Israel, has a wealth of Holocaust information and material available online for parents and teachers.

This book is recommended for readers 8 and up.
This book was borrowed from the Webster Branch of the NYPL. 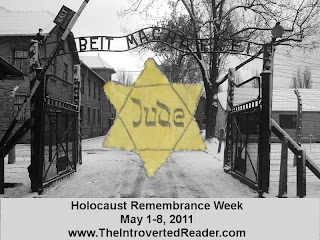 Non-Fiction Monday is hosted this week by Jean Little Library