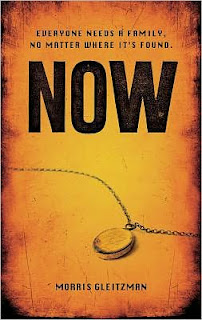 ‘Once I escaped from an orphanage to find Mum and Dad. Once I saved a girl called Zelda from a burning house. Once I made a Nazi with a toothache laugh. My name is Felix. This is my story.'

‘Then I had a plan for me and Zelda.  Pretend to be someone else.  Find new parents.  Be safe forever.  Then the Nazis came.’

‘Once I didn’t know about my grandfather Felix’s scary childhood.
Then I found out what the Nazis did to his best friend Zelda.
Now I understand why Felix does the things he does.  At  least he’s got me.  My name is Zelda too.  This is our story.’

As you can see, Now continues the story of Felix begun in Once and Then.  And true to the meaning of the word, Now takes place in the present.  Felix, that charming 10 year old we last saw curled up in a hiding hole to avoid capture by the Nazis, is about to turn 80 years old. He is living in Australia, has had an eminent career as a physician, was married, is now separated from his wife, but on friendly terms, and has one son.  His son and daughter-in-law, also physicians, are off in Africa, helping sick children in Darfur and so Felix’s 11 year old granddaughter, Zelda, has come to stay with him in his somewhat isolated home.

Felix is a sad, but understanding grandfather.  He doesn’t even get mad at Zelda when he learns she has taken the locket, his most precious possession that had belonged to the first Zelda, the spunky 6 year old who was fleeing the Nazis with him.  He is especially not mad after she explains that she thought it would make her brave, but he does guess she is being bullied.  Zelda, as the new kid in school, immediately finds herself confronted by bullies and devises a number of ways to avoid and hide from them - shades of her grandfather here.

At the same time, though, Zelda also feels she must deal with her grandfather’s sadness.  To cheer him up, she plans a surprise birthday picnic tea for him, attaching hundreds of thank you notes from patients to a tree, and lighting some candles, despite the no fire ban.  The entire state of Victoria, Australia was a tinder box because of an intense heatwave.  So naturally, when Josh, a boy in her class and the asthmatic brother of her main tormentor, shows up Zelda accidentally sets the letters on fire, when she pushes him away.  But later when she hears the bush fires that are raging nearby, Zelda is afraid that she has caused them with the burning thank-yous.

So far their area has not been in danger, but then, the day after the picnic tea fiasco,  while in town, they hear that the wind has changed direction.  Zelda and Felix race home to save the house and Felix’s dog, Jumble, only to find themselves forced to find safety in a hiding hole while the fire rages about them.

Felix, despite all he has accomplished, has never really come to terms with original Zelda’s death and his failure to protect and save her.  That is a heavy burden to carry around for almost 70 years.  But now he finds himself confronted by another conflagration and a chance to protect and save another girl named Zelda who also means the world to him.  It seems Felix has come full circle - but will he and Zelda both survive this time?

In books 1 and 2, Once and Then, Gleitzman gave the reader a pretty good look at what life was life under the Nazis, the level of cruelty people can be capable of and the level of kindness, too.  But the scars left by the Holocaust on those who survived it must be so unimaginably painful, one wonders how any healing can happen.  But healing is what  Felix needs to do in Now and so, for that matter, does granddaughter Zelda, who feels she can never to good enough to live up the idealized image of her namesake.

Gleitzman has managed to pull this trilogy completely together, yet, interestingly enough, each novel can even stand on it own.  So, if you have any interest at all in WWII literature, this is a trilogy not to be missed.

Well, I say trilogy very tongue in cheek.  I thought Once, Then and Now would be a trilogy, but maybe , maybe not.  Time will tell.

This book is recommended for readers age 12+
This book was obtained from the publisher and will be available in the US June 5, 2012.

Be sure to visit Morris Gleitzman to read about the real life stories that influences Felix's story.

There is an online teacher’s guide for Now, but I am including the link to all three guides for your convenience:


FYI: the bush fires in the novel is based on a real event. The bush fires that began on Saturday, February 7, 2009 have come to be known as the Black Saturday Bushfire.  You can read about them here. http://en.wikipedia.org/wiki/Black_Saturday_bushfires 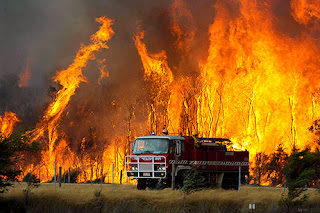 Email ThisBlogThis!Share to TwitterShare to FacebookShare to Pinterest
Labels: Family, Holocaust, YA