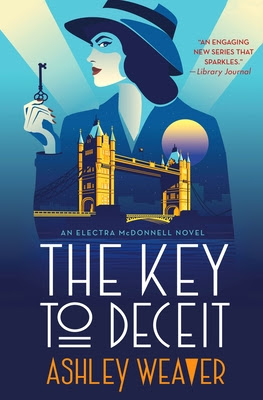 It's September 1940 and it's only been a few weeks since Ellie McDonnell helped the handsome, aristocratic Major Gabriel Ramsey break  into a house to retrieve some important blueprints before they could be given to the Nazis in A Peculiar Combination. Naturally, she's antsy for another chance to work with Major Ramsey, but first a little background information for those who haven't discovered this great series: Ellie was raised by her Irish Uncle Mick in London after her mother was arrested and imprisoned for supposedly killing Ellie's father, Uncle Mick's brother. Uncle Mick is a locksmith by day, and He, his three sons and Ellie were a safe crackers by night until Major Ramsey caught them in the act and gave the McDonnell family an ultimatum: live on the straight and narrow and help in the war effort or go to prison. I guess you can figure out which choice they made.

Luckily, Ellie doesn't have to wait long for the Major to need her safe cracking skills. A woman found dead floating in the Thames is wearing a curious bracelet - it's a thick cuff that is locked to the wearer's wrist. Ellie is a little queasy about picking the lock on the wrist of a dead woman and stalls by going over her clothing, which was new and expensive. Once Ellie has picked the lock open, they determine it contains a miniature camera. Major Ramsey dismisses Ellie and sends her home, but not for long. Turns out the clothing description helped them determine that the woman was doing something underhanded - there was a bag of precious gemstones hidden in her coat.

Ellie and her sorta, kinda boyfriend Felix Lacey call on a pawnbroker friend to help them identify and figure out the source of the gems, the women, now identified as Myra Fields, had hidden in her coat. Myra was engaged in espionage for the Germans and the photographs she had taken would be very useful to the Germans should they ever begin bombing London. They also learn that she had been staying in a boarding house run by a Mrs. Paine.

Ellie and Major Ramsey decide to visit the boarding house as an engaged couple and cousin of Myra's, to see what they can find. And in the midst of gathering evidence of a possible spy ring, the Nazis begin bombing London. Once bombing begins, not knowing who is part of the spy ring or how large it is makes the need to capture the spies taking pictures of possible bombing sites and their ring leader even more imperative.

There's a lot going on in this novel and it moves at a pretty quick pace, but it is by no means overwhelming. In fact, some of it is a nice break from the mystery at hand. First, there is the relationship between Ellie and Major Ramsey. She is feisty, and can be a buster, while he is aristocratically uptight. Yet, there is chemistry brewing between them and Ellie's family would be pleased a punch to see her involved with him. And Ellie does think about it, but wait, what about Felix? He's so sweet and things could get more serious between them and he is more her sort, criminally speaking. Then, there is the case of Ellie's mother, who maintained her innocence right up until her death from the flu epidemic. Can Ellie find a way to clear her mother's name? And of course there are the everyday changes that war brings on in people's lives. I just love details.

All in all, I found The Key to Deceit an enjoyable mystery, with lots of details and good plotting so that when the culprit was finally revealed, I was surprised.  The fact is that I was a little skeptical about the Electra McDonnell series when I first heard about it, but after reading these first two novels, I can't wait for the third book.

Thank you, NetGalley, for supplying me with an EARC.