The Lion Above the Door by Onjali Q. Raúf 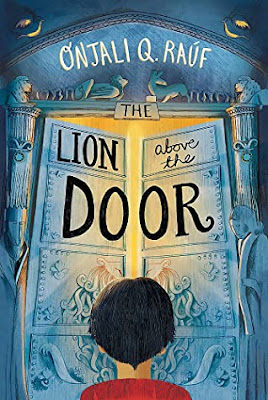 Every year for my birthday, I throw a few books I want to read into a shopping cart and say Happy Birthday to myself. One of the books I chose for my last birthday was The Lion About the Door. It's a contemporary WWII story by Onjali Q. Raúf, who have become a real favorite author of mine.

Leo Kai Lim and his best friend Sangeeta Singh are both looking forward to their class trip to the RAF Museum and Rochester Cathedral (in Kent). They've been studying WWII in school and even though the two friends know that they are probably the only ones in their class who don't have a personal connection to anyone who fought in WWII, they are excited to see the planes on display. Leo's parents are from Singapore, and Sangreta is Indian descent.

Leo and Sangeeta are the only two kids in their school who look like them and of course, there is a bully named Toby who never tires of going after Leo. He's kind of an Eddie Haskell character in that he acts sweet and innocent in front of teachers and parents, but all that changes in the school yard and sometimes in class. He makes fun of the Singaporean food Leo brings for lunch, pushes and shoves him and the morning of the school trip, Toby hits Leo hard several times with a tennis ball. As a bruise developed on his leg, Leo thinks about the bruise inside him that never seem to heal, getting hit over and over. Leo is convinced his inner bruise will only heal if "something big and unexpected and brilliant happened." But the chances of that happening were zero as far as he was concerned, after all, he and Sangeeta "were too different for brilliant things to ever happen to us. And the bruise knew it." (pg27)

But imagine the surprise Leo gets when he sees the name Leo Kai Lim DFC and a golden lion above it carved into the marble with other names of other soldiers who were WWII heroes. Stunned by this discovery, Leo promises to find out all he can about this soldier.

Back at school, Leo's teacher Mr. Scott announces that for Remembrance Day, their class has been selected to take part in TV's Real Kidz Rule competition, a program everyone loves. For Leo, it becomes the perfect opportunity to research all he can about Leo Kai Lim DFC and keep his promise. Unfortunately, finding information about this hero pilot of WWII turns out to be quite difficult. Sangeeta is also excited about the competition since it will give her an opportunity to research Indians who participated in the war for the British named Singh, as well as the contributions of Indian women. Could good things be coming Leo's way finally? Will his bruice have a chance to heal? Or is Leo headed for a big disappointment?

I really enjoyed reading The Lion Above the Door and found myself reluctant to put it down when I had to do other things. Leo's first-person narration is appealing and so endearing in its innocent truthfulness, even as Raúf threw themes of family and family history, cultural underrepresentation, contemporary and historical racism, perseverance, courage, and teamwork his way, but all with a sensitive hand and a combination of seriousness and humor.

And because this is a Onjali Q. Raúf novel, there is one surprising turn of events when Olivia Morris, the coolest most popular girl in class offers to help Leo and one very zany episode when Leo and Sangeeta break into the RAF museum.

I did like that Raúf allowed her characters to be flawed. For example, Leo had trouble with his dad's never standing up for himself or Leo until he learns why, and Mr. Scott is not always the most culturally sensitive person but he does learn to be more aware of it thanks to Leo and his project.

Back matter in this book includes information on racism and prejudice, now and during WWII, as well as the real forgotten heroes WWII included in this book.

The Lion Above the Door is one of my better birthday books and I highly recommend it to anyone who is interested in WWIIs ignored heroes, or for anyone concerned about cultural underrepresentation. Both Leo Kai Lims are heroes in my book.