A Peculiar Combination (An Electra McDonnell Novel #1) by Ashley Weaver 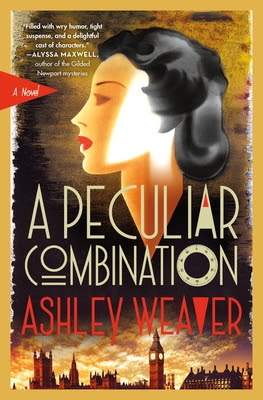 It's August 1940, Britain is at war with Germany, the Blitz hasn't begun yet, and so, Ellie McDonnell, 24, and her Uncle Mick thought it would be safe to break into the deserted home of some wealthy Londoners and rob their safe. Sure, they had done this plenty of times before. Uncle Mick is a locksmith by day, and cracking open people's safes at night was more like a hobby than theft, and niece Ellie is a natural. Only this time, they get caught and it isn't by the London police. Instead, they were take to a large townhouse in Belgravia, now occupied by the military under the command of the quite arrogant Major Gabriel Ramsey. After some interrogation about how they crack safes, Ellie and Uncle Mick are given a proposition - prison or help the Major break into a safe containing some stolen classified blueprints having to do with national security and retrieve them before they are given over to the enemy.

It sounds like a simple enough job, so Ellie and Uncle Mick accept the proposition - after all, they are patriots who want to do their bit for the war effort. In fact, Ellie's cousins Toby and Colm are already serving their country. So the deal is, Ellie and Major Ramsey will break into a house and get the documents, while Uncle Mick is help as collateral. Everything goes well except the papers are gone and the person in whose safe they were has been murdered.

Having carried out their part of the deal made with Major Ramsey, Ellie and Uncle are released with a promise to live on the straight and narrow for the duration. But then Ellie gets called back to Major Ramsey's office who needs her safecracking skills once again. Ramsey is convinced that the documents will be handed over at a party and lecture on Chinese porcelain to a potential conspirator with German ties. There are any number of possible suspects, but thanks to Ellie's pickpocketing skills, they are able to glean enough information on what appears to be a solid lead.

Meanwhile, a prickly relationship is growing between Major Ramsey and Ellie. And the fact that an old ex-girlfriend of his may be mixed up in the conspiracy to pass documents to the Germans doesn't help matters. Ramsey is uptight, formal, and slow to trust Ellie, whereas Ellie takes her tasks seriously, but can be feisty and a real buster when she wants to be, though her teasing adds some much needed humor to their relationship and their mission. Don't get me wrong - there are also enough serious and even dangerous moments.

On the whole, I really enjoyed this first novel in what looks to become a series. It may seem wrong for the main character to be a criminal, after all, they are usually the pursued not the pursuer. But right from the start, Ellie and Uncle Mick are forced to mend their ways (permanently? I doubt it). And although more than one person is killed, the novel inn't graphic, putting into the cozy class.

A Peculiar Combination lives up to it ironic title and more, and will have readers wanting even more by the time they reach novel's end.

This book is recommended for mystery fans age 14+
This book was an eARC gratefully received from NetGalley
Posted by Alex at 6:59 PM