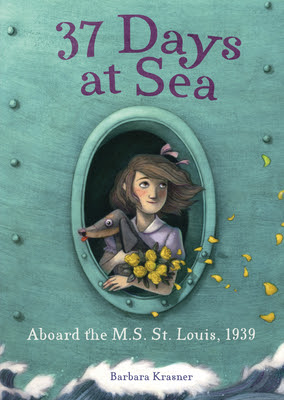 This is the second book by Barbara Krasner that I have read about the 938 European Jews who set sail in 1939 aboard the M.S. St. Louis hoping to escape the Nazis and find safety in Cuba. The first book was called Liesel's Ocean Voyage. It is a fictionalized story based on the real experiences of Liesel Joseph Loeb (1928-2013) and I highly recommend it, and in fact, I would read it in tandem with 37 Days at Sea to get a broader picture of a voyage that began with so much hope ended in such disappointment.
Here, Krasner introduces readers to Ruthie Arons, 12, from Breslau, Germany. The decision to leave and eventually settle in America came shortly after Kristallnacht, when their beautiful home was ransacked by Nazis who broke into Jewish homes and businesses all over Germany, stealing, breaking and destroying everything in their path.
Now, onboard the M.S. St. Louis, missing the family they had to leave behind, Ruthie, a somewhat mischievous girl thinks that  "Adventure/ across the Atlantic Ocean beckons." And indeed it does, when she quickly makes friends with Wolfie, a twelve-year-old Jewish boy traveling with his mother and whose father is already living in Havana.
Secure in the knowledge that they have the necessary papers to enter Cuba, people on the ship enjoy a wonderful voyage of good food, entertainment, and friendliness, including Captain Schroeder. And although the crew wear their NSDAP pins, there is a problem with only one, Kurt Steinfelder. Ruthie's mother suffers from seasickness and her father, an attorney, is busy with some other business, so that leaves her plenty of time to hang out with Wolfie, exploring the ship and getting into mischief: "Grown-up, watch out. We/ are a band of trouble,/ and by we, I mean/ Wolfie and me." (pg 24)
There is a, however, a very concrete reminder of what was left behind in Germany, when a group of men with shaved heads come on board and Ruthie's father must explain to her about concentration camps and the arrest of so many Jewish men on Kristallnacht, including him. Some were released, others sent to camps, released with the promise never to return.
After two weeks at sea, on the fifteenth day, the M.S. St. Louis enters Havana, Cuba but it doesn't take long to realize that there is more trouble ahead for these Jewish refugees. No one is allowed to disembark and enter Cuba, including Wolfie and his mother, even though his father is already there. Negotiations take place, the United States refuses to help and eventually the ship is forced to return to Europe. Needless to say, the trip back is nothing like the trip to Cuba.
37 Days at Sea is written in free verse from Ruthie's first person point of view, which gives it an interesting perspective. Ruthie may have experienced some of the cruelty of the Nazis in Breslau, but she was younger and her parents seem to have been able to shield her from some of the worst events. The trip to Cuba and the return to Europe makes this a kind of end of innocence story, but the beginning of understanding the seriousness of what was happening to the Jews in Europe for Ruthie (and hopefully today's reader).
Krasner used a few different poetic forms, and although the free verse is sometimes a little off, it is still an important book for young readers, especially in the lower middle grades. She really knows how to build the excitement and expectation of landing in Cuba and being free to come and go as they please as the ship travels to its destination, and the disappointment and dejection the passengers feel when they are forced to go back. The first half of the books is devoted to the trip to Cuba, and the second half covers the trip back, which I think is an important part of the story to include.
Back matter includes an Author's Note, a Timeline of Events, suggestions for Further Information including Films, Oral Testimonies, and Books.
This book was a digital version purchased for my personal library.
Posted by Alex at 10:52 AM