Love in the Library by Maggie Tokuda-Hall, illustrated by Yas Imamura 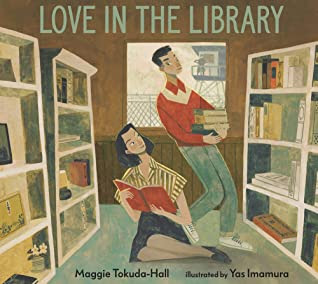 Love in the Library by Maggie Tokuda-Hall,
illustrated by Yas Imamura
Candlewick Press, 2022, 40 pages
This is such a sweet fictionalized story of two people, the author's grandparents, who found love despite having been sent to Minidoka, a Japanese incarceration camp located in the middle of nowhere in Idaho after the nation of Japan attacked Pearl Harbor in 1941.
Tama was a young woman who loves books and reading and who took a job as librarian in the camp library despite not knowing how to be a librarian. George was a young man who seemed to like books, because every day he was at the library door with a big stack of books to return.
George and Tama, and all West Coast people of Japanese descent were sent to different incarceration camps despite having never committed a crime. Minidoka was unbearably hot in summer, and bitter cold in winter, and muddy in fall and spring because of rain. And there was virtually no privacy.
Tama loved to read and could get really lost in some of the books she read. But unlike George, Tama found it hard to smile, not at her books or the boys playing baseball outside the library. When George asked what was wrong, Tama couldn't find the right words to tell him. But George knows exactly the right word to describe what Tama was feeling: human.

And that's when Tama discovered that the reason George spent so much time in the library wasn't because he was a big reader, but it was because of her. In a place that tried to dehumanize them, it was a miracle to fall in love in Minidoka, but that's just was George and Tama did. And it didn't take long for them to get married despite the terrible circumstances they were living in and had their first son in the camp. 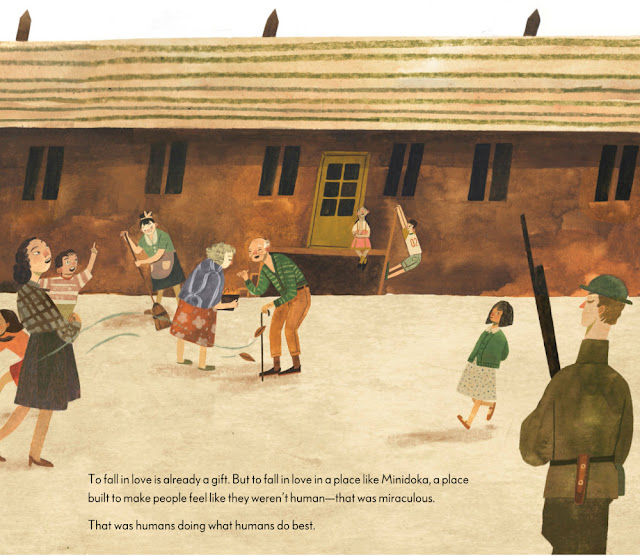 This is such a wonderful book for introducing young readers to what happened to people of Japanese descent once the United States entered WWII. The author never minimizes Tama's despair about how her life suddenly changed with her incarceration in Minidoka, or the terrible, unjust conditions under which people were forced to live, but she still manages to offer readers an optimistically hopeful story, all the more wonderful because it is based on a true story.
The text is complimented by detailed gouache and watercolor illustrations, reminiscent of the period and done in a palette of desert browns and tans broken by the more colorful clothing the inhabitants had brought with them.
Back matter consists of an Author's Note with more age appropriate information about how Japanese Americans were sent to the camps in the first place, and how it was done as well as more information on the real Tama and George.
Love in the Library would be a excellent addition to any school library or home library. And you can download a Teacher's Guide from the publisher HERE
This book was an eARC gratefully received from Candlewick Press
Posted by Alex at 10:18 AM