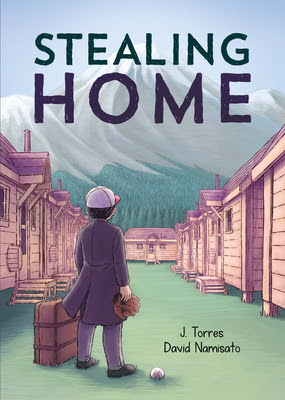 Stealing Home by J. Torres,
illustrated by David Namisato
Kids Can Press, 2021, 112 pages
It's summer 1941 and the Asahi Baseball team is the pride of Powell Street in Vancouver, BC, "the champions of the Japanese community." For young Sandy Saito and his dad, Dr. Saito, that means going to games together and cheering their heroes on and later, playing catch in the backyard together.
But all that changes on December 7, 1941 when the Japanese bomb Pearl Harbor. Suddenly, Sandy's dad was short tempered and didn't want to play catch anymore. The kids in school, who had been Sandy's friends, turn on him, calling him names and refusing to let any Japanese kids play baseball with them, even throwing rocks at them.
Soon, Japanese persons are forced out of some areas of British Columbia and moved to "camps" in old, abandoned mining settlements, including the Saitos, but not before Dr. Saito goes out on a house call and doesn't come home. All his family knows is that the government sent him to "where he was needed most,"
leaving Mrs. Saito, Sandy and his younger brother Ty to cope with being relocated to an internment camp in the middle of the Canadian wilderness, with no electricity or running water.
Adjusting to their new life isn't easy, but eventually Sandy and Ty make friends and have some fun. But it is all work for their mother and the other women, who need to find ways to keep their children warm in the coming winter, plus they now have to share their small shelter with another family, including a baby. However, it turns out that some of the players for the Asahi Baseball team are also at the camp. Is it possible that baseball can provide some sense of normalcy and happiness for Sandy and the other people in the camp?
J. Torres provides readers with a very clear picture of what life was like for Canadians of Japanese descent after the United States entered the war, in this graphic novel told in the first person from Sandy Saito's perspective. Interestingly, the Canada had entered the war immediately after Britain declared war on Germany on September 3, 1939 and yet had left Japanese persons living on its west coast along until Pearl Harbor.
Torres has really captured the fear and confusion that Sandy felt about why things changed so abruptly because of events he doesn't completely understand, and his hurt feelings as his beloved father becomes more stressed and short-tempered.
I find it interesting that baseball played such an important role in the lives of both Japanese Americans and Japanese Canadians during the war. Perhaps because it is a game of skill and both players and spectators can really get lost in, enabling them to escape their new reality of losing everything they had worked for and being put into slapped together internment camps in the middle of nowhere.
Stealing Home is a wonderful vehicle for introducing younger middle grade readers to this part of the history of WWII. I read a black and white ARC and so I can't comment on the final art, but the illustrations are detailed and not frighteningly graphic.
You can learn more about the Asahi Baseball Team HERE
This book was an eARC gratefully received from Edelweiss+
Posted by Alex at 12:22 PM