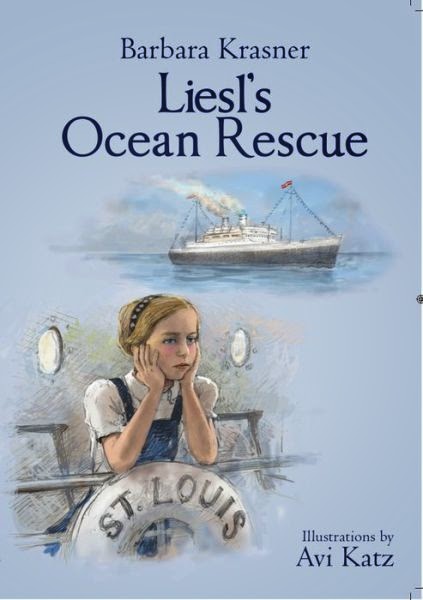 I've read two books about European Jews escaping to Cuba in the late 1930s, and both were works of fiction based on true events.  Passing through Havanna by Felicia Rosshandler is an interesting YA/Adult novel based on the author's experiences.  The Other Half of Life by Kim Ablon Whitney is a  middle grade/YA fictionalize version of the trip 938 Jews made on a ship sailing to Cuba and the US and Canada and not being allowed to enter one of these countries and based on the actual trip the MS St. Louis made in 1939.

Liesl's Ocean Rescue is also a fictionalized version of the fated ship, the St. Louis and based on one girl's true experience of her disappointing trip to safety from the Nazis in Germany.  Liesl's trip began on the night of her father's 56th birthday, November 9, 1938.   While celebrating, the gestapo shows up and arrests her father simply because he was Jewish.  Later that night, more Nazis showed up, but luckily Liesl's mother gets her out of the house in time.  The following day they discover that their house was ransacked and everything is broken and ruin.  The same destruction happened all over Germany, but only to Jewish homes and businesses.

Liesl is sent to the country for safety, but a month later, after her father was released, her parents come to get her.  It is time for the Joseph family to leave Germany.  On May 13, 1939, they board the ship MS St. Louis and head for Cuba.

On board, young Liesl experiences a freedom she has never known before.  She is able to go wherever she wants, to sit wherever she pleases and even go to see the movies that are played on board, all things that Jews were forbidden to do in Nazi Germany.  And Liesl enjoys her trip, exploring the ship, make friends with the crew and playing checkers with other new friends.

Barbara Krasner's Liesl's Ocean Rescue is the only book for younger readers that I have found that covers the ill-fated rescue voyage of the Jews on board the MS St. Louis.  It is well written and sticks to Liesl's story, ending just as the passengers find places to go to, but I;m afraid the end is a little too abrupt.  What happens to the Joseph family?  It is included but it is in the Author's Note: the real Liesl and her family first went to London, England, and in 1940, they emigrated to the United States.

I found this to be an excellent introduction to the Holocaust for young readers.  It doesn't cover the Holocaust per se, but the ordeal of being Jewish and trying to get away from the Nazis even before the war started.  Putting it into a story about a very confident, very friendly, and very happy 10 year old I think makes the story all that much more poignant.

Along with and complimenting the story are black and white pencil illustrations by Avi Katz.

Besides her Author's Note, Krasner has also included a Selected Bibliography and other sources for finding out more about the MS St. Louise and her passengers.

Liesl's Ocean Rescue is an ideal picture book for older readers who want to learn more about the Holocaust and have an interest in realistic historical fiction.

Liesl passed away in 2013 and you can read her obituary in the Jewish Exponent HERE
Posted by Alex at 1:32 PM