A Boy is Not a Ghost by Edeet Ravel 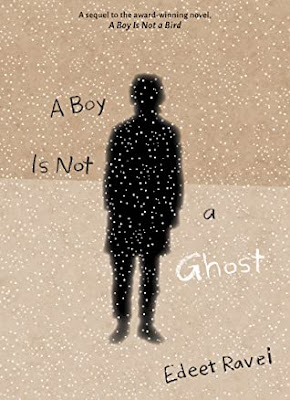 Based on true events, this sequel to A Boy is Not a Bird continues the story of Natt Silver.  You may remember that Natt's father was arrested and sent to a gulag in Siberia after their Eastern European home came under Soviet occupation, and he was considered an enemy of the Soviet state.

Now, in the summer of 1941, Natt and his mother, along with 26 other people, have been traveling in a cattle car for more than six weeks after being arrested and are on their way to Siberia. The journey is nothing short of a lice-infested "Train of Horrors, finally ending in Novosibirsk, in southern Siberia. There, they are taken to an outdoor schoolyard where they will be staying. Natt is still haunted by the terrible thing he did after his father was arrested. His mother was told she could see his father through a window at a certain time, but when she and Natt walked by, Natt turned his head away from the window, an act he is sure he will never forgive himself for and is convinced his father won't either.

Life in Siberia allows for a certain amount of movement, simply because escape is pretty much out of the question. But life is hard hard. There is never enough to eat, clothing is old, dirty, patched, and never warm enough. And each time their circumstances change, Natt thinks things can't get any worse, and yet they do. But Natt also makes friends wherever he goes, who can often help in get wants he wants. There is Irena, 18, who voluntarily travels to Siberia in the same cattle cart as Natt and the others, in order to try and find information about her exiled parents. Natt lives with her for a while when his mother is arrested for "stealing potatoes" after being set up by an official who needed to meet her arrest quota. And there is Olga and Peter, siblings who live in Novosibirsk and whose father has an important and useful-for-Natt job. And Gabi Mindru, 11, whose mother takes Natt in when Irena leaves to find her parents, and who nurses him back to health when he gets deathly ill. Through Gabi, Natt meets Igor, 16, whose father is an NKVD captain, but who also proves helpful to Natt, nevertheless.

Like the first book, A Boy is Not a Ghost is an very readable novel, and narrated in the first person by Natt, who is as beguiling as ever. His story, which begins when Natt is 11-years-old ends towards the end of the war when he is 15, as you might have surmised, it is a book about fighting to survive every day against all odds. Natt, who often misread people and their motives in the first book, learns to make himself invisible, and to communicated in code and to understand when others communicate to him in code. I wrote about the first book that Natt held on to his innocence in part because there were always enough kind people in his life who really liked him, and though no longer as innocent as he once was, Natt is still an extremely likable  boyand people are often willing to help him.

He is still writing to his best friend Max in Switzerland, though he never hears from him and the reader never finds out if he made to safety. But Natt's letters are a wonderful shortcut vehicle for more giving information about what is happening with Natt and the other exiles in Siberia.

Though it is a sequel, A Boy is Not a Ghost can be read as a stand alone novel, though I would recommend reading both books. The author, Edeet Ravel, has included a lot of information relevant to Natt's experiences under Soviet occupation in the book's back matter that I would also recommend reading. I read an eARC and did not see all of the chapter illustrations or map that will be in the published book.

This book is recommended for readers age 9+
This book was an eARC gratefully received from Edelweiss+
Posted by Alex at 11:20 AM