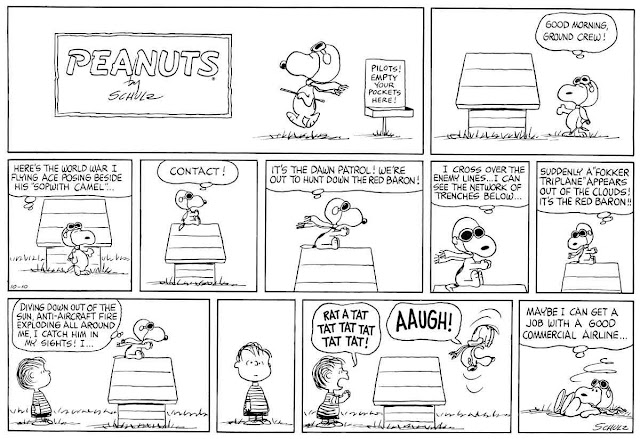 Sunday, October 10, 1965 is the very first appearance of Snoopy as the World War I Flying Ace and his never seen nemesis the Red Baron. Of all Snoopy's personas, this one has always been my favorite. Dressed in goggles, a silk scarf and the iconic leather flying cap of those early WWI pilots, and climbing up onto the red roof of his doghouse pretending it is his Sopwith Camel, Snoopy lets his imagination fly. Always defeated by the Red Baron, Snoopy ends each dogfight with his signature "Curse you, Red Baron!"
But who exactly was the Red Baron, Snoopy's arch rival?
The Red Baron is based on Manfred von Richthofen, an actual German flying ace. Richthofen flew a Fokker DR1 triplane, which he had painted a bright scarlet red inside and outside, earning him the nickname "der Rote Baron" (the Red Baron). During his career as a fighter pilot, Richthofen shot down 80 Allied aircraft, but was killed in a dogfight on April 21, 1918. Interestingly, Richthofen landed his plane intact near a small French village called Vaux-sur-Somme before his died. His body was recovered, and he given a burial with full military honors by the Australian forces stationed there. Richthofen was only 25 years old when he died. 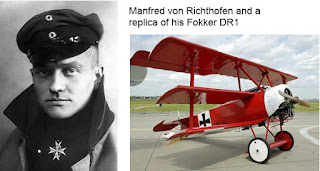