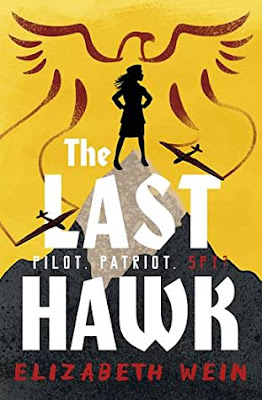 This is Elizabeth Wein's third novella about a female flier in WWII. The first, White Eagles, is the story of Kristina Tomiak who is accepted into the Polish Air Force Reserve in 1939, and whose job it is to fly a person carrying important information to a meeting in Lvov, Poland. In the second novella, Firebird, it's 1942 and teen Anatasia "Nastia" Viktorovna Nabokova is a Soviet flight instructor who is ultimately accused of treason for defying Stalin's orders.

Now, it's 1944 and 17-year-old Ingrid Hartman is a talented glider pilot, who loves the feeling of freedom that being in the air gives her. Ingrid has a stutter and in Hitler's view, that means she does not belong in his master race. People like Ingrid are taken away, never to be seen again. So Ingrid has learned how to not speak unless absolutely necessary. When a German officer shows up at her home and becomes angry because she didn't respond to his knocking on the front door and forgets to greet him with Heil Hitler,  Ingrid and her father both fear possible harsh reprisals.

Ingrid's cousin Jonni agrees to give her an official title at his glider school, where she is his best gliding instructor, giving her some sense of protection. One day, when she is there alone, a woman arrives looking for her. It turns out that the woman is Hanna Reitsch, Germany's most famous female test pilot. Ingrid's friend, Emil Bruck, had recommended her to Hanna because of her gliding skills. It seems she wants Ingrid to accompany her on a propaganda tour of Luftwaffe bases, where Reitsch will give speeches to new pilots and recruit the top glider pilots among them for a special mission.

Naturally, Ingrid jumps at the chance to work with this famous pilot who doesn't seem the least bit bothered by her stutter. And this new job will only require Ingrid to follow Reitsch in a Hawk glider, doing some synchronized fancy flying, but to take down the information of the enthusiastic recruits - none of which requires her to speak. But the mission Reitsch wants these young men to volunteer for begins to bother Ingrid. The project Reitsch is promoting is called the Leonidas Squadron, and it is her job to convince the young pilots that dying for their country is the right this to do for the Fatherland without actually telling them that they would be flying suicide missions.

Ingrid is thrilled when her friend Emil lands at one of the air bases she and Reitsch are also at. Emil had already said things to Ingrid about the treatment of Jews and others forced to work in munitions factories. Ingrid knows that's a fate she could have met under different circumstance because of her stutter. Now, while forcing a kiss on her, Emil carefully slips something into the waistband of her skirt. At first, feeling betrayed by him, Ingrid is angry - after all, they are only friends - but once she sees what he gave her, she knows she must follow his pleading for her to fly to the safety of the Allied forces not so far away now and show them the photos of the concentration camps Emil had taken as proof of what Germany has been doing.

But will Ingrid find the courage she needs do fly this last mission, knowing it would be treason?

Narrated in the first person by Ingrid, readers are introduced to a lot of information, from Nazi Germany's eugenics program to the almost formed suicide squadron. Ingrid not only has a stutter, but her mother, a nurse, had worked in a youth hospital for children who had learning difficulties, so the Hartman family knew firsthand about forced sterilization, followed by forced neglect, and that those who didn't die then were simple taken away to a place where they all died from "pneumonia," including the mayor's son. (pg 10-11)

Readers will really feel the indecision Ingrid experiences when she learns about the Leonidas Squadron and why she and Hanna Reitsch are putting on glider shows. Hanna Reitsch is a friendly, accepting mentor who just happens to be helping to plan the possible deaths of so many young men, most not much older than Ingrid. It is also an opportunity for Wein, herself a pilot, to provide background information the different kinds of planes and gliders used in Nazi Germany, as well as the unmanned vengeance or V-bombs that terrorized England for a while in 1944. And all this is so seamlessly woven into Ingrid's narrative.

The Last Hawk is published by Barrington Stoke in a dyslexic- and reluctant reader- friendly format. I really like these books, but as an adult dyslexic who has been reading a lot longer than most kids, I wondered if kids would find them as reader-friendly as I do. So, I gave one to a young friend (age 11) who has also been diagnosed as dyslexic and not a fan of reading. Sure enough, they not only liked the format but enjoyed the story, too.

Pair this with White Eagles and Firebird for an amazing trilogy about girls who fly in WWII.

This book is recommended for readers age 9+
This book was purchased for my personal library
Posted by Alex at 10:45 AM