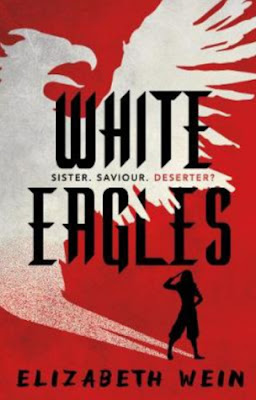 Twins Kristina and Leopold Tomiak have always been fiercely competitive with each other and also share a love of flying. Naturally, when it looks like Germany is getting ready to go to war, they both sign up for the Polish Air Force Reserve. But when only Kristina is accepted into the White Eagles, Leo is totally perplexed.

Not long after becoming an Eagle, Kristina is assigned to fly an important visitor from the Vistula Aeroclub outside Warsaw to a meeting in Lvov, in southern Poland, to relay important information. But just as the plane carrying the visitor lands, it is clear that it has been attacked by machine gun fire. It turns out the Luftwaffe has been scouting over Poland and shot at their plane. The visitor is killed but the plane's pilot is still alive and knows what the information is.

Now, it's Kristina's job to get the information to Lvov, which she does, safely arriving at Birky airstrip just outside the city limits on August 31, 1939, and where her brother is already waiting for her. The next morning, Kristina wakes up to sirens and an announcement that the German Army has begun its invasion of Poland. The next day, the battle for the airstrip at Birky begins, and Kristian is taken prisoner by a German soldier.

In the sky, she sees two fighter planes caught in a dogfight, without firing at each other, but fighting with only their planes and Kristina realizes the pilot in the Polish plane is her brother. Leo finally comes out the victor, after causing the German plane to crash. But his victory is short lived. Held by the arms by two German soldiers, a German officer pulls his gun and shots Leo between the eyes, as Kristina watches stunned and horrified.

As the other prisoners around her go berserk over the shooting, Kristina, devastated over losing her twin, manages to take advantage of the chaos and to get to her plane. Without a helmet or goggles, she takes off, flying away from her brother's murder and not landing until she finally finds a narrow, clear field in an apple orchard. But no sooner has she landed, than she realizes she isn't alone. A gun is pointed at her head and she was told to put her hands up and get out of the plane. Thinking it is a Nazi soldier, imagine her surprise when it turns out to be an 11-year-old boy named Julian Srebro with a story to tell and a desperate need to get out of Poland. What follows is an exciting, perilous journey for both Kristina and Julian, marked by grief, biting cold, hunger, kindness, cruelty and a few pieces of life-saving chocolate Hanukkah Gelt

White Eagles is a short book written in three parts and inspired by real life aviation hero Anna Leska, liaison pilot for the Polish Air Force and flying missions for them when the Nazis invaded Poland on September 1, 1939 (do read the Author's Note at the back of the book for more information). It is a well researched novel that contains a lot of information about what life for the Polish people was like right after Hitler's army invaded their country. Around that reality, Wein has woven a historical fiction novella that will hold readers captive until the end. But, let's face it, Wein is a master historical fiction storyteller and she knows just how to create characters and settings that make you question whether it is fact or fiction you are reading.

I bought White Eagles at the Book Depository in part because it is written by Elizabeth Wein and in part because it is published by Barrington Stoke, a children's book publisher in Edinburgh, Scotland. And what makes this book special, besides the great story, is that Barrington Stoke publishes books that are adapted for reluctant and dyslexic readers. And since I'm a dyslexic reader, I know first hand how really important the design of these book is. I first discovered them when I read D-Day Dog by Tom Palmer and now I'm sold on them. And no, I get nothing for talking about these books, and there are lots of them by great authors, not from Book Depository or from Barrington Stoke. It's just my experience.