Ensnared in the Wolf's Lair: Inside the 1944 Plot to Kill Hitler and the Ghost Children of His Revenge by Ann Bausum 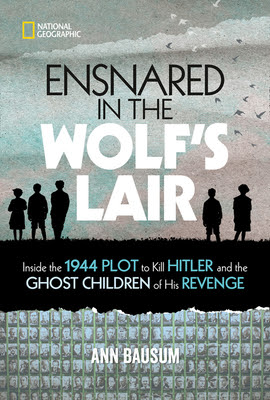 One of the things I've learned after reading a number of books by Ann Bausum is that you can always count on her to write a compelling, well-researched book. She really knows how to present the participants, lay out the timeline, and contextualize the meaning of each historical event she tackles. And she has done it again in this book about the  Valkyrie plot to kill Adolf Hitler, in what could otherwise be a confusing event in the history of Nazi Germany. But then, Bausum takes the story further and tells the reader what happened later to the children of the people involved in the plot.

Bausum begins her account with a detailed account of Adolf Hitler's rise in popularity and his seizure of power after the death of President Paul von Hindenburg in 1934. From the beginning, Hitler used fear and brutality to maintain control over the German people, and his predilection for retaliation meant little dissent among the people. But by 1943, some prominent Germans, among the *Count Claus von Stauffenberg, Cäsar von Hofacker and Friedrich-Wilhelm von Hase, began to realize that Hitler had to be stopped.

A plot to kill Hitler and overthrow his regime was planned, adapting the name Valkyrie. The plan was simple enough - von Stauffenberg would carry a briefcase with a bomb in it to a July 20, 1944 meeting at Hitler's Wolf's Lair retreat. He would excuse himself, but leave the briefcase behind. Unfortunately, the planned assassination  failed and the conspirators were quickly captured, put to death and cremated.

But what about the families of the dead conspirators? Here is where Bausum shines a light on what is probably an almost unknown part of this story. The deadly fate of the conspirators wasn't enough for Hitler, who insisted on broadly applying a policy of Sippenhaft or family arrest to their "families, including spouses, children, siblings, parents and other relatives" (pg. 70) and put SS leader Heinrich Himmler in charge if it.

Over 700 family members were arrested, and then,  children were separated from adults and taken to a former youth retreat called Borntal located in the secluded town of Bad Sachsa. There, they were traumatized even further. All family mementoes, including photographs and personal items, were removed from their suitcases, they were given new last names, and although they were marginally taken care of by staff, they were forbidden to speak to any outsiders.

What happened to these children, nicknamed the Ghost Children by the community around them, is really the main focus of this book. Using the diary kept by one of the children, Christa von Hofsacker, interviews with a number of the detainees still living, and extensive research, Bausum gives readers a detailed window into just what these children suffered without even knowing why it was happening to them.

As much as I know about Nazi Germany, the story of these Ghost Children was new to me. I did know about the Sippenhaft policy, but has just assumed it didn't involve children, who could have been re-educated the same way the Nazis re-educated Jewish children who looked Aryan from conquered countries. Instead, they followed a policy of erasure, isolation and harassment.

To help readers, Bausum includes a map of Europe on July 20, 1944, copious photographs, including many of the families of the conspirators before the assassination attempt, and extensive back matter. There is a timeline of the rise and fall of Nazi Germany and Adolf Hitler, a list of the Borntal's Sippenhaft Families, a Resource Guide,  A Note from the Author, and a detailed Bibliography, among other resources. Bausum also has a number of classroom suggestions to use in conjunction with this book, which you can find HERE.

Ensnared in the Wolf's Lair is a book for readers interested history, World War II, and/or Nazi Germany.

This book is recommended for readers age 10+
This book was an eARC gratefully received from Karen Wadsworth at Media Masters Publicity
*Here is an interesting fact I learned when I was writing about Fliegerinnen or women pilots in Nazi Germany. As part of the Sippenhaft policy, relatives of Count Claus von Stauffenberg were also arrested, including his older twin brothers Berthold and Alexander. Alexander, who was not part of the conspiracy, was married to Melitta Schiller, a half Jewish, half Aryan aviator. She had been awarded the Iron Cross in 1943, arrested in the 1944 Sippenhalf roundup, but later released. Melitta tested dive bombers for the Luftwaffe, and was shot down by an American fighter plane in 1945.