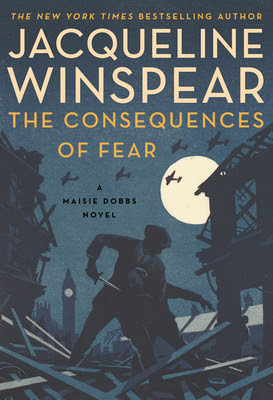 It's October 1941, Britain has been at war with Germany for two years with no end in sight, and Londoners are still being bombed and dealing with the aftermath. For 12-year-old Freddie Hackett, the fastest runner in school, it means running messages to and from agents all over London, to earn a few shillings that his cruel father will spend in the local pub. But when Freddie witnesses a murder one night while running a message, only to deliver the message to the man who had done the killing, he's terrified and needs to tell someone about what he saw. And he knows just who to talk to.

Meanwhile, Maisie Dobbs has been enjoying motherhood ever since adopting Anna, the young evacuee who has been staying with Maisie's father and stepmother in Kent. But Maisie is also realizing that she has fallen in love with Mark Scott, the American agent from the Department of Justice that she worked with for the British Intelligence services under Robbie MacFarlane, senior detective with Scotland Yard's Special Branch. Yet, as much as Maisie might want to spend most of her life in Kent taking care of Anna, she decides to take Freddie Hackett's case pro bono, after finding out that Scotland Yard doesn't believe him and discovering blood at the site of the murder.

In the midst of her investigation, Maisie accompanies MacFarlane to Scotland where they are to test and evaluate twenty British recruits and a few French volunteers, all wanting to become overseas intelligence agents. But when Maisie meets Major André Chaput, there to observe the French recruits, she is sure that he is the murderer that Freddie Hackett described in such detail, including the deep ridges on either side of his face and the patch of pale skin under his eye. Could it possibly be a coincidence? MacFarlane has been annoyed at Maisie for taking on the Freddie Hackett case to begin with, but when she brings up her thoughts about Major Chaput, he immediately sends her back to London.

Once again, Maisie has a lot on her plate, but now that Anna and Mark have come into her life, you can really feel how torn she is between them and the happiness they bring her and her work, which brings its own satisfaction. Added to all that is Freddie Hackett, a child with a cruel alcoholic father who has had to grow up to fast in order to take care of his mother and younger sister, Grace, who has Down Syndrome. We all know Maisie is a softy when it comes to children and so, not surprisingly, she also manages to find the Hackett family a safe place to live away from Mr. Hackett while things are sorted out.

I have a feeling this may be a pivotal novel in the life and career of Maisie Dobbs. Throughout the novel, she contemplates the possibility of turning her business over to Billy, her right hand man, marrying Mark Scott and being a full-time mother to Anna. Maybe that's why this novel wasn't as exciting as previous novels. Which is fine, I still enjoyed reading it. But now I really wonder what's in store for Maisie. I have to admit, I was crushed when Alan Bradley ended his Flavia de Luce series, but there are a few more war years left, so hopefully we aren't that close to saying good-bye to Maisie.

This book is recommended for readers age 14+
This book was an eARC gratefully received from NetGalley
Posted by Alex at 11:25 AM