Maurice and His Dictionary: A True Story by Cary Fagan, illustrated by Enzo Lord Mariano 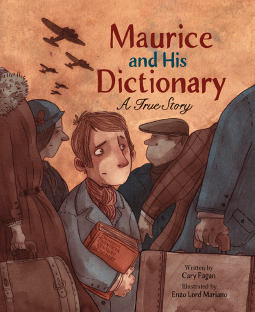 It's May 10, 1940 and the Nazis have just invaded Belgium. For 14-year-old Maurice Fajgenbaum and his family - parents Adéle and Max, older siblings Adeline and soccer-loving Henri - that means having to leave Brussels, the only home they had ever known, as quickly as possible, packing only what they could carry and leaving the rest of their possessions for the Nazis to pillage. And simply because they are Jewish.

Luckily, father Max has business contacts in Paris and so the family heads there. Since there were warnings about the Nazi invasion, Max had already bought the train tickets his family would need. But after days on the train, the family is dropped off in a small village. Weeks later, father Max is almost rounded up with other refugees, and the family is quickly on the move again. This time, they find themselves in Pau, at the foothills of the Pyrenees in Vichy, France, the unoccupied so called free zone.

In Pau, life is a little easier for the refugee family and Maurice even begins school again, hoping to fulfill his dream of becoming a lawyer one day, comforting himself with his father's conviction that "the law will make us all equal." But once again, the Nazis begin to round up Jews, sending them to camps in Poland and Germany, and the Fajgenbaum family is on the run.

This time, they make it to port city Lisbon, Portugal, but only long enough to get the papers and passage on a ship that will take them to Jamaica. It is on the ship that they are separated from each other for the first time. Arriving in Jamaica, the Fajgenbaums, along with their fellow passengers, are taken to an internment camp indefinitely. Maurice, still dreaming of becoming a lawyer, finds teachers all over the camp willing to tutor him, including an English teacher who recommends he get permission to go to town to buy a dictionary. 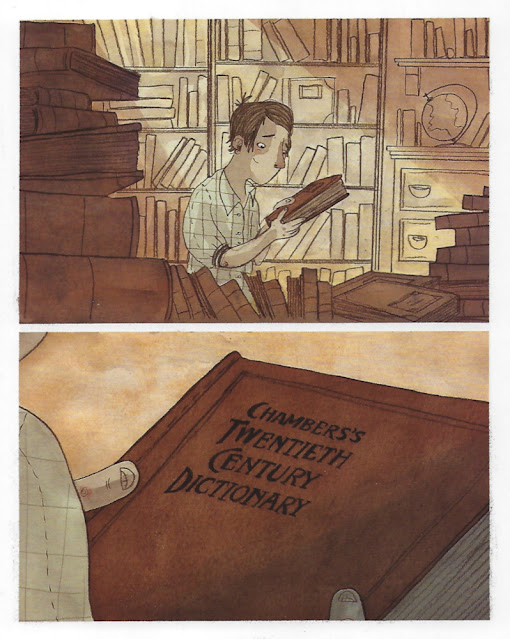 Safe from the Nazis, Maurice continues to study hard, improving his English with the help of his tutor and his new dictionary, graduating high school and going on to college and law school in Canada.

Maurice and His Dictionary is a picture book for older readers told in graphic format, an homage based on the true story of the author's father's experience during the Holocaust. While this book may lack some of the hair-raising details of how Jews were treated by the Nazis and even the French, it is definitely a survival story, and the Fajgenbaum family proved to be very resourceful, especially Max, and they were lucky enough to meet enough kind people to help them escape the Nazis and Europe just in time.

The story is also a homage to Maurice's perseverance. He never wavered in his desire get an education and become a lawyer. And despite all the setbacks Maurice faced, he always followed his father's motto "Solve one problem, then the next, and then the next" which is how he finally finished high school.

The stylized illustrations, in sepia tones giving them a feeling of age, are simple but if you look closely you will discover all kinds of interesting details. The illustrations and the wide white borders around each page provide readers with lots of space to extend the story.

This is such an inspiring story, all the more so because it is a true story. Be sure to read the Author's Note for more information about Maurice, including photographs (there's even one of his dictionary).

And there is a Teacher's Guide that can be downloaded courtesy of the publisher, Owlkids Books.

This book is recommended for readers age 8+
This book was borrowed from the NYPL
Posted by Alex at 8:27 AM