I am Defiance: A Novel of WWII by Jenni L. Walsh 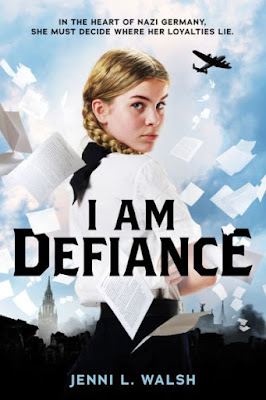 The story opens in Munich on April 20, 1942. It's Adolf Hitler's birthday and to celebrate, the local chapters of the Jungmädelbund induct all 10-year-old Aryan girls into the Hitler Youth. Brigitte Schmidt and her best friend are12 and they can't wait for Hitler Youth summer camp and the freedom away from family that it brings. But Germany is at war and that evening, Brigitte is told that there will be no summer camp. Not only that, but when older sister Angelika, 18, begins talking about a time when Germany wasn't ruled by Hitler, Brigitte feels that such talk is blasphemous. After all, she's only known life under the Nazis and has been indoctrinated into believing everything Hitler says is truth.

Brigitte has noticed Angelika and Papa with their heads together late in the evening whispering about assassination attempts, bombings, and concentration camps in front of a large map. Papa is worried about Angelika. She had polio a few years back and had to be sent to Switzerland to recover. Now, she has a limp and her left arm is weak, but in a country that demands all its citizens be free of mental illness, deformities, paralysis, epilepsy, blindness, or deafness, Angelika could be sent to an institution or a concentration camp if she is discovered.

One day when Brigitte picks up the mail, she discovers a leaflet in with other letters. It's all about hitler and fascism, and the bombing of Köln. Then, at the next JM meeting, the girls are asked if their family has received any blasphemous leaflets. When Brigitte's friend Rita admits her family did, the leaders and other girls begin to shun her. And more leaflets begin arriving in the Schmidt's mail.

As much as Brigitte believed all the Nazi propaganda she was told, her blind faith is beginning to see things in a different light because of the leaflets and her father's concern about Angelika going to do her two months of Reichsarbeitdienst in August. But it is hard for her to let go. and even harder not to say something to her best friend Marianne, also a staunch believer in Nazism and who is hoping to become a group leader in the BDM when she's older.

In August, Angelika leaves for Ulm to work in a munitions factory. It doesn't take long before her first letter arrives all about her new friend Sophie who is helping her meet her quota. Meanwhile, the British are bombing Germany more and more, and Brigitte is beginning to realize that she is becoming more and more anti-Hitler.

When Angelika returns to Munich, she's a changed person. Brigitte worries about her and what she's up to with her new friend Sophie. Apparently, so does Papa who makes arrangements for them to escape Germany to an uncle's in Switzerland if worse comes to worse. And it does, Sophie and her friends are arrested for dropping leaflets. Papa is also arrested by the Gestapo leaving Angelika and Brigitte alone. Should they wait to see if Papa will come home or should they try to make it to Switzerland and safety alone?

I am Defiance is an interesting look at life inside Nazi Germany from the perspective of a young girl who, in the beginning, has blind faith in her Führer and what he says and readers slowly get to see that erode as truth seeps into her life. I thought her group leader in the JM, Elizabeth, 15, was true to life - cold, cruel and cunning - just the way the Nazis liked them. I also thought that Papa telling them to play their part as loyal to the Führer and his doctrines was true for many families - Papa bought the Nazi newspaper faithfully and the girls did their part (the Nazis were forced to threaten parents with imprisonment and fines for keeping their children out of the Hitler Youth because so many didn't support the regime).

One of the things I really look for in historical fiction is a time reference. In I am Defiance, I felt I was reading in a vacuum until the first leaflet appears in the Schmidt's mailbox. That happened in June 1942, and Sophie Scholl's Reichsarbeitsdienst in the munitions factory in Ulm was August-October 1942. Her arrest (and Papa being taken into custody) happened February 18, 1943. Sophie Scholl and the White Rose's activities really helped put this in perspective for me.

Two other things bothered me about this book. One was the language. I felt it was too modern and too American. When that happens, it pulls me out of the story. The other thing is the games Brigitte and her friend Marianne played. While there was a German version of Monopoly, it was quickly banned by the Nazis for being too capitalist. And although it says they played Sorry!, most likely they would have played Mensch ärgere Dich nicht, similar to Sorry! and very popular in Germany. Most likely, as Ms. Yingling pointed out in her review of I am Defiance, they would have played Nazi propaganda games.

Aside from these things, I enjoyed the basic story and watching as Brigitte grow and begin to think for herself. Kids should be aware that it is true that not everyone supported what the Nazi's believed but played a part the way the Schmidt's do. And, of course, most of things that bothered me won't really bother young readers who are just looking for a good story about WWII. And they will find one in this book.

This book is recommended for readers age 9+
This book was an eARC gratefully received from Edelweiss+
Posted by Alex at 12:30 PM