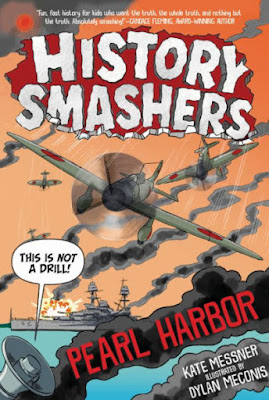 Reading History Smashers: Pearl Harbor, made me realize that I've read and reviewed a lot of books about the events of December 7, 1941, but most of them were novels - good novels but fiction nevertheless. Amazingly, I've never read a nonfiction book about Pearl Harbor for this blog, so I was pleased to read this new book by Kate Messner from her series History Smashers.

Messner takes a look not only at the facts surrounding the attack on Pearl Harbor, but also looks at some of the myths and legends that have circulated ever since. And she begins at the beginning, debunking the popular idea that the attack "happened completely out of the blue, with no warning and nothing to suggest there might be trouble." By carefully and succinctly looking at Japanese history from 1853, when Commodore Matthew Perry led an expedition to try to open up isolationist Japan to trade with other countries, Messner shows how opening this small island country led to its desire for more land and more natural resources, eventually leading to the invasion of Manchuria and China in the 1930s.

Following Germany's lead, Japan also set her sites on islands in the Pacific already colonized by other nations, including the US. After Japan signed a agreement with Germany and Italy in which they promised that if one were attacked, the others would help defend them. Feeling protected and now quite militarized, Japan invaded French Indochina.

Next, Messner looks at the errors in judgement made by the United States that led to such devastation when Japan attacked Pearl Harbor. She goes back to 1924, when an army officer named William Mitchell was sent to evaluate the preparedness of US forces in the Pacific and Far East. He warned that Japan was thinking about expanding its empire, had its sites sent on Pearl Harbor and the Philippines and that that would eventually lead to war. But by 1939, Americans didn't want to go to war and so President Roosevelt tried negotiating with Japan to maintain peace. While Japan readied itself for the attack, by training pilots, redesigning torpedoes for the shallow waters where the American fleet had been moved to, mistakes, miscommunications, and incomplete intelligence gathering all led to what ultimately felt like a surprise attack to Americans, all of which Messner carefully looks at.

History Smashers: Pearl Harbor is a short but very informative, well researched look at the attack on Pearl Harbor. Not only does Messner lay out her facts and debunk the myths surrounding the attack that led America into WWII, but she takes this very complicated event and makes it accessible to young readers. Plus, she takes the narrative beyond Pearl Harbor and looks at the racist treatment and incarceration of Japanese Americans living on the West Coast of the US.

Messner includes lots of informative sidebars introducing readers to people, places, and histories, as well as lots of photographs and maps. There is extensive back matter that includes A World War II and Pearl Harbor Timeline, an Author's Note, Books, Websites and Museums to Visit for further exploration, and an excellent Bibliography.

This is a book that should be read by anyone interested in WWII. How good is it? Well, I thought I knew a lot about Pearl Harbor, but even I learned a few new facts.

This book is recommended for readers age 8+
This book was an eARC gratefully received from NetGalley
Posted by Alex at 10:22 AM