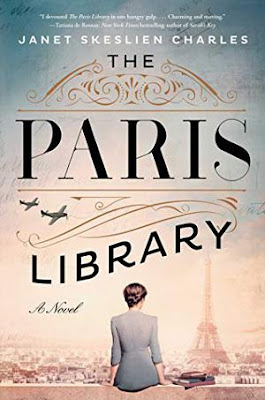 It's February 1939, and Parisian Odile Souchet has just landed her dream job as a librarian at the American Library there. Odile has been visiting the library since she was a child and already knows many of the people who frequent it on a daily basis. Meanwhile at home, and much to the amusement of Odile and her twin Rémy, her father, a police captain, has been inviting protégés from various precincts to the house for Sunday dinner, in the hope she will be attracted to one. And finally, it happens - a blond policeman named Paul, who actually shows up at the library bearing daffodils and looking for reference books.

Odile also meets Bitsi, the friendly children's librarian who loves reading as much as she does, and wealthy, but unhappy Margaret, the wife of an attaché at the British embassy who can't adjust to living in Paris, missing her mum, England, and speaking English.

Odile brings Margaret into the library fold as a volunteer while teaching her French. Like Odile, Margaret blooms in the library, finding friends, confidence, and meaning in her life and the two women become fast friends.

It feels like an idyllic life until France falls to the Nazis and everything changes. Libraries in Paris are now controlled by the Nazis, who have already closed some and banned certain books. When the day for the inspection of the American Library arrives, it turns out that Miss Reeder, the director of the American Library, knows the inspector, Dr. Fuchs, a librarian himself. He basically leaves the most of the library's books intact, but forbids some to circulate and says certain people, namely Jews, may no longer be allowed into the library. Miss Reeder is determined to keep things going, however, and everyone pitches in to secretly deliver books to the homes of the banned Jewish subscribers and to send books to soldiers to help keep up morale.

Meanwhile, Rémy has fallen in love with Bitsi, has joined the army and is taken prisoner. Odile has fallen in love with Paul, and Margaret's husband has left Paris. But when Odile learns about some of the things Paul is doing, and begins to notice changes in Margaret, she starts to question her feelings towards both of them, and unwittingly betrays Margaret to Paul.

Juxtaposed to Odile's life and these events in wartime France, is the story of Lily, a bored, lonely teenager living in 1980s Froid, Montana, right next door to the elderly, mysterious and reclusive but worldly Mrs. Odile Gustafson, the town's only war bride. Wanting to know more about her and what makes her so different from the other ladies in Froid, Lily decides to make to do a school report on France, hoping to get help from Mrs. Gustafson. And surprisingly, Mrs. Gustafson does agree to help her. Over time, the two become friends, and when Lily's mother passes away, Mrs. Gustafson is there for her.

I found the chapters with Lily's story to be somewhat of a relief from the tensions of WWII, even though she experiences her own tragedy. Lily is a wonderful character - nosy, curious, looking for a way out of Froid and into the wider world. And Odile is just the person to lead her there. But, it is through her friendship with Lily from 1983 to 1988 that we learn what happened to Odile after the war and how she ended up in Froid, Montana.

I was first attracted to The Paris Library because it was about a library in Paris during WWII. What lifted it out of good book and put it into great book for me was the inclusion of real people who worked in the ALP at that time, like Americans Miss Reeder, the directress, and library trustee Clara de Chambrun, as well as the Russian born head librarian Boris Netchaeff. Even the German library inspector, Dr. Fuchs, was a real person and a professional acquaintance of Miss Reeder. All of this added such a sense of authenticity to the novel and allowed for some interesting history to be worked into the story without seeming forced.

And I loved being in the library with Odile, Miss Reeder, Boris, and everyone else. Even the subscribers who spent their days there, reading, talking, arguing were so realistic, perhaps because they reminded me of the habitués I used to know at the NYPL when I was doing research. Each one of Skeslien Charles' characters were brave, defiant and loyal, even through the darkest days of the war.

If you are looking for a book about books with themes of community, communication, friendship, betrayal and resistance, you can't go wrong with The Paris Library.

You can find a detailed Reading Group Guide courtesy of the publisher Simon & Schuster HERE.

This book is recommended for readers age 14+
This book was an eARC gratefully received from the publisher.
Posted by Alex at 12:23 PM