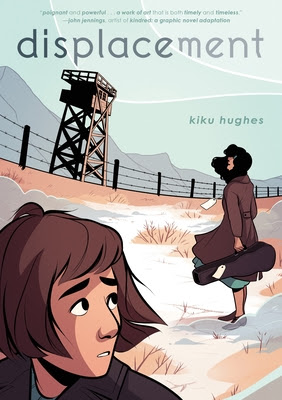 It's 2016, and Japanese American Kiku, 16, and her mother are on vacation in San Francisco from their home in Seattle. Kiku's grandmother had lived in San Francisco before the attack on Pearl Harbor, followed by Executive Order 9066, calling for the roundup and incarceration of all people of Japanese descent living on the West Coast. After looking for house where they lived, Kiku's mother is disappointed to see it has been replaced with a mall. When she goes in to see what's there, Kiku stays outside and that's when the first displacement, as she calls them, happens.

Suddenly, Kiku finds herself in the audience of a violin recital where a young version of her grandmother, Ernestina Teranishi, is performing. Kiku didn't know her grandmother, but she did know that she had been a gifted violinist. Returning to the present, Kiku and her mother head to the hotel, and hear Donald Trump calling for a total shutdown of Muslims entering the US.

Before leaving San Francisco, Kiku displaces again, this time after Executive Order 9066 has been issued and she finds herself in a line of people being watched by armed guards. Again, returning to the present and heading home to Seattle, Kiku realizes how little she knows about her own Japanese culture and history, in part because her grandmother never spoke to her mother about what happened to the Japanese Americans in the camps.

Back in Seattle, Kiku displaces once again, finding herself reduced to being Number 19106, and traveling on the same bus as the Teranishi family, heading to Tanforan Assembly Center, a racetrack where the Japanese Americans are forced to live in horse stalls that still smell of manure. There, Kiku lives with a roommate, Aiko Mifune, right next door to the Teranishi family.

Kiku's first two displacements were for short periods of time, but now she finds herself living in the past for an extended time. This means that Kiku can learn something about her grandmother and great grandparents, but it enables author Kiku Hughes to show what went on behind the barbed wire and armed guards. The overcrowding, the poor quality of the food, the lack of privacy in the latrines and showers are part of daily life there, but so is the tenacious spirit of the Japanese people, who are determined to turn their living conditions into something better. Kiku even finds a love interest. 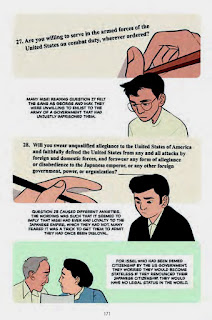 By the time Kiku is transferred to the Topaz Relocation Center in Utah, she knows she won't be returning to the present anytime soon, and determines to make the best of her situation. Once again, she finds herself living near her grandmother and even her love interest from Tanforan. The whole time she is torn as to whether or not to introduce herself to her grandmother, or merely to continue to observe her from afar. Life in Topaz is a real eye-opener for Kiku. People who had been productive and law-abiding are now incarcerated and deprived of their civil rights. When the government issues a loyalty questionnaire,  those who refuse to answer yes on questions 27 and 28, and renounce their Japanese ancestry, face harsh punishment, including Kiku friend Aiko. But after after someone was shot and killed, people really begin to worry about their safety. Does Kiku ever return to the present? Yes, of course, and at a very interesting point in her story. But does her experience in the past change her?

Displacement is somewhat autobiographical for author Hughes, who also never knew the grandmother who had been in the internment camps during the war. Sending Kiku back in time enables her to show the personal and community trauma that was inflicted on people who had done nothing wrong. What I found most telling is Kiku's feelings of helplessness and her gradual acceptance of her incarceration. That was scary, given today's world.

I think Hughes really captured Kiku's emotional truth, and through her, readers also know the emotional truth of her grandmother and all the other Japanese people who had been incarcerated for no other reason than their race. Though the word interned is generally used to describe what happened, Hughes chooses to use incarceration, given that people had no freedom and lived surrounded by barbed wire and armed guards, it really did resemble prison-like conditions.

Displacement is one of the best graphic novels I have read about the Japanese American experience in WWII. You might want to pair it with George Takei's They Called Us Enemy.

This book is recommended for readers age 12+
This book was an eARC gratefully received NetGalley
Posted by Alex at 12:50 PM