Rip to the Rescue by Miriam Halahmy 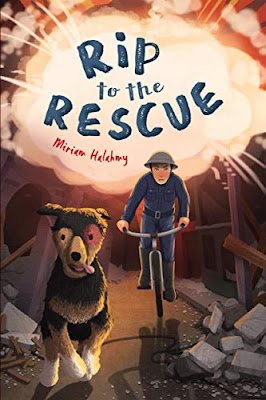 It's 1940 and London is being bombed nightly by the German Luftwaffe. Wanting to do his bit for the war, and tall for his age, 13-year-old Jack Castle convinced the wardens that he is 17 (and kept the fact that he is deaf in one ear to himself) so he could become a messenger boy.  Now he rides his bike through the destroyed neighborhoods of London every night delivering important messages to fire brigades. Not only does it make him feel proud to be doing his bit, but it also gets him away from his angry, authoritarian father. Mr. Castle served in WWI and lost his lower leg. Now he has an ill fitting prosthetic, and a bad case of PTSD, and he's taking it all out on Jack. His parents don't know about his messenger activities, and Jack has convinced them that he goes over to help his grandfather to the shelter. Granddad does know what Jack is doing and lets him keep his equipment in his flat.

One night a bomb explodes so close Jack is thrown from his bike. Injured and dazed, after the All Clear, he is helped to an emergency room by a young girl his age named Paula, then to home. The next day, Paula comes by and she and Jack head out together. But they soon run into Rocky and his gang, boys from Jack's school who have always ganged up on him because of his deaf ear. One of the boys, Ned, seems to be pals with Paula's younger sister Becky, 10.

On his way home later, there is a day raid and seeing a neighbor attending to his Granddad, Jack is heading home when he hears scratching behind a broken wall. It turns out to be a dog, hungry and cold. Knowing he can't take the dog home after freeing him, so he brings it to his grandfather's, who is delighted. Named Rip because of his one ripped ear, the dog turns out to be a great companion for Jack, who ends up leaving him with Paula and Becky during the day and taking him on his messenger rounds at night.

One day, after another day bombing, Jack and Paula hear a woman screaming about her baby buried under a pile of rubble that had been her home. Sensing someone is trapped, Rip runs up the pile and starts pawing and barking. Sure enough, he's located where the baby, still alive, is located. Soon the baby is freed and Jack wonders if Rip has the ability to locate people buried alive under rubble.

There's a lot going on in Jack's story. Halahmy has captured the fatigue of Londoners brought on by the unrelenting nightly bombings by the Germans, spending sleepless nights in the Underground, basements, and even in crypts. Jack's nightly bike rides show readers a city torn apart, but also people who meet the enemy with courage and determination.

For all Jack has been the victim of bullies in school, he is now quite the hero. As he and his new friends Paula and Becky begin to trust each other more, they share their secrets - Jack tells them about his deafness and the bullying, Paula and Becky tell him they are Jewish but to keep it private. Becky is rather devil-may-care about things, but Paula is so afraid that the Germans will invade, she shows Jack the hideout she creating for her family.

His new friendship with Paula and Becky cause Jack dilemma's throughout. As brave as he is as a messenger, and as embarrassed as he is when Paula witnesses his father's behavior, Jack wonders if he will ever be able to stand up to his father's constant berating? And will his father ever see him for who he is? When he catches Ned stealing food, does Jack tell or show compassion when he learns why Ned steals and keep his secret? And when a sudden raid happens close by, will Jack reveal Paula's hideout to others?

Rip to the Rescue is a fast read because it is a real page-turner. Full of action, suspense, and danger, it is sure to hold the attention of young readers.

And you can download an Educator's Guide, courtesy of Holiday House, HERE