The Tortoise and the Soldier: A Story of Courage and Friendship in World War I written and illustrated by Michael Foreman 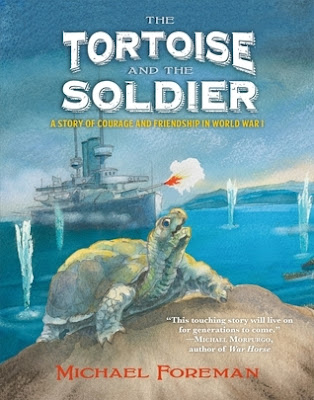 It's the early 1950s and office boy Trevor Roberts just wants to be a full-fledged reporter for his hometown paper, the Lowestoft Journal, but so far, he only get reporting jobs once in a blue moon, and usually not very interesting.  One March morning, Trevor is sent out to see if Mr. Friston's tortoise has woken up from his winter hibernation.  Little did Trevor know that that would be the beginning of a long friendship and a wonderful article for the newspaper.

Slowly, over a series of weekends, Trevor peddles out to the two converted railroad cars that Henry Frisson's lives in and hears the story of how he acquired his tortoise, whom he named Ali Pasha, during World War I.  Told in a series of flashbacks and using his saved wartime memorabilia, including his diary, Henry recalls wanting to see the world as a boy, and joining the Royal Navy hoping to realize his dreams.  But shortly after, WWI breaks out and Henry's ship, HMS Implacable, heads straight for Gallipoli.  There, Henry finds himself on shore and in the trenches, charged with the duty of removing wounded and dead soldiers from the battlefield, ironically in the company of the Turkish soldiers they were fighting with.

It is in the midst of fighting one day that Henry is knocked down into a shallow crater by a shell blast, followed by a hard object hitting his head.  It turned out to be a tortoise whom Henry befriends while waiting for the fighting to end.  Henry decides to rescue the tortoise and sneaks it on to the HMS Implacable, hiding it in his battleship station, the Number Two Gun turret.  Because Henry found his tortoise on the Gallipoli Peninsula, which was part of the Ottoman Empire then, he decides to name it Ali Pasha, after one of its rulers.

From Gallipoli, the HMS Implacable heads to the Suez Canal, and eventually back to England.  And Ali Pasha go home with Henry, where the two lived out their days together.

I always know that when I pick up a Micheal Foreman book, I am going to like the story and the artwork equally and The Tortoise and the Soldier is no exception.  Here is a wonderful, lifelong story that begins on the battlefield of one of the worst campaigns in WWI and continues of over 70 years.

And though the center of the story is about Henry and Ali Pasha, there is a lot of story relating to Henry's family, his school days, his brothers fighting in Europe, and mostly centrally, his relationship with the other sailors assigned to Number Two Gun turret.  Foreman subtly shows the reader how important it is to be able to not just get along with those who live in such close proximity to one, but also how much better it is if you really like each other and work together.  As Henry tells Trevor, his shipmates would bring Ali Pasha treats from their own meals in the hope that he would bring them luck.

Perhaps the best message a young reader can take away from this story, is that the enemy, in this case the soldiers from Turkey, are really at bottom no different from Henry and his mates, a important discovery he makes during a short cease fire to collect the dead.

This is a very pleasant story, one told for the most part with a light touch, but make no mistake about it, Foreman doesn't sugar-coat what happens in war, on the sea and in the battle field.  Recognizing oneself in the enemy, and realizing how deadly war is are both good reasons for kids to read this book.  But so is the enduring friendship between man and tortoise.

The Tortoise and the Soldier is historical fiction based on the lives of the real Henry Friston and Ali Pasha.  Foreman includes information, photos and other artifacts about both man and tortoise, as well as his own personal story knowing Henry during WWII.   But it is Foreman's own watercolor illustrations that really enhance and give depth to the tale he is telling:
This is a wonderful story that is sure to appeal to many middle grade readers.

This book is recommended for readers age 9+
This book was borrowed from the NYPL
Posted by Alex at 8:54 AM