They Called Us Enemy by George Takei, Justin Eisinger, and Steven Scott, illustrated by Harmony Becker 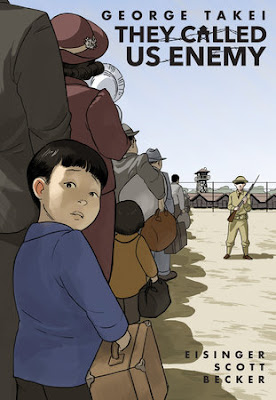 My brother and I used to watch Star Trek reruns religiously. We were too young to know about WWII and this country's treatment of Japanese Americans, and their relatives who were born in Japan but unable to become American citizens. Which isn't surprising since they didn't teach it in school, either. But you know what they say about history, if you don't ignore it, you are bound to repeat it. And sure enough, as this book shows, we have. But we also are learning more about people's experiences in the WWII Japanese American internment camps, in both fiction and nonfiction. And now, we have heard from George Takei, helmsman Hikaru Sulu on the old Star Trek shows, witty social media commentator, political activist, and most importantly, outspoken critic and survivor of America's internment camps.
Realizing that most Americans do not really know much about what happened to the Japanese Americans in WWII, Takei first turned his wartime experiences into a Broadway musical called Allegiance in 2015. The play centers on a family, much like Takei's own, sent an internment camp in Wyoming and their different reactions to being imprisoned behind barbed wire and watched by armed guards.
In addition to Allegiance, George Takei has written an excellent, detailed graphic memoir, that is more accessible and ideal for young readers to learn about this dark part of American history from someone who lived it. Structured as a Ted Talk being given by Takei, as well as an interview with NPR, it begins in the middle of the night as their father wakes George and his older brother Henry up and tells them to quickly get dressed. followed by a knock on the front door of their home by two armed guards in 1942. Executive Order 9066 had been signed by President Roosevelt and all people of Japanese descent were being rounded up to be sent to prison camps.
Losing their successful dry cleaning business, and forced to practically give away their possessions, the Takei's are first sent to the Santa Anita Racetrack. There,  they were housed in former horse stalls until October 1942, when they were sent to Camp Rohwer in Arkansas, and later to Tule Lake, California.
Jumping back and forth between the 1940s and the present allows Takei to contextualize the personal with the public, the past with the present, giving a much broader picture than just one person's memoir, increasing it relevancy for today's readers. He does this by including specific people and events, such as his own early activism with Martin Luther King, the 1998 awarding of the Medal of Honor to veterans of the 442nd Infantry Regiment, and Fred Korematsu, his conviction for refusing to obey Executive Order 9066, and his subsequent lawsuits claiming there was racial bias attached to the Order. Fred's conviction was thrown out, but not the Order. Sadly, Takai brings readers into the present with the Supreme Court striking down the Korematsu decision under Trump v. Hawaii, allowing the United States to once more discriminate against a particular people - asylum seekers from Mexico and South American put in cages, as well as the controversial Muslim ban, disallowing Muslims to enter the United States.
But the main part of Takei's narrative is what happened to his family. He has really captured how degrading, how humiliating and painful an experience it was for his parents, who tried their best to shield their children from the grim reality of what was happening.
I think the most poignant part of the memoir is the government's realization that they had an abundant source of potential soldiers in the camps, but only if they proved their loyalty. Takei's father struggles with the two questions #28 and #29  regarding where one's loyalty lay - United States or Japan. Answering yes to both questions got you in the army, answering no got you a train ride to Tule Lake, a harsh internment camp for those whose loyalty was questionable. The Takei's were sent there in 1944.
The illustrations are done in comic book style, and rendered in black, white and shade of gray giving is a kind of cold starkness that describes this part of American history so accurately.
Pair They Called Us Enemy with Citizen 13660 by Miné Okubo and Fred Korematsu Speaks Up by Laura Atkins and Stan Yogi.
You can find a useful Teacher's Guide courtesy of the publisher Random House HERE
This book is recommended for readers age 12+
This book was purchased for my personal library
Posted by Alex at 11:46 AM