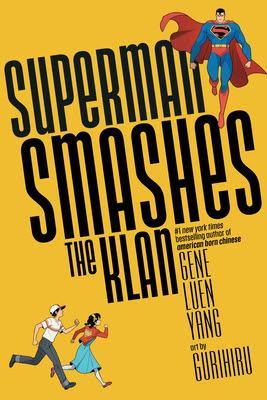 Superman was both a popular comic and radio show during World War II, but once the war was over, there were no more Nazis to fight. So, Superman's creators turned their sights to the home front and, at the request of the Anti Defamation League, they took on the KKK. Beginning on June 11, 1946, the radio show ran a 16 part story called "Clan of the Fiery Cross." Each episode was 15 minutes long and sponsored by Kellogg's Pep Cereal. The story proved to be extremely popular, except of course with the Klan, who encouraged members to boycott Kellogg's products.
Flash forward to 2019. Leave it to Gene Luen Yang to take the story from the radio show and give it his own magical touch turning it into a graphic novel and making it as relevant today as it was in 1946. The premise is basically the same: a Chinese American family - Dr. Lee, his wife and two children, Tommy and Roberta - have just moved out of Chinatown and into a new house in the center of Metropolis.
Roberta is a rather timid soul, not at all happy about leaving the comfort and safety of Chinatown. Tommy is much more outgoing, but the two siblings really care about and look our for each other
High schooler Tommy loves to play baseball and is an ace pitcher. On a walk to explore their new neighborhood, he and Roberta meet neighbor Jimmy Olsen who just so happens to also coach a baseball team. But when Tommy beans star batter Chuck Riggs on the head with a baseball during a tryout, Chuck goes ballistic with racial slurs about the Lee siblings. Chuck is immediately fired from the team. At home, it turns out, Chuck's uncle Matt is head of the local Klan of the Fiery Kross and after hearing what happened, he decides it's time for Chuck's initiation into the terroristic activities of the Klan. Chuck's initiation is to help the Klan "burn away America's impurities" and drive the Lee's out. After a cross burning on their lawn and an attempt to burn their home, the Lee's African American neighbors, including Inspector William Henderson of the Metropolis police arrive to help put out the fires. The next morning, reporters Lois Lane and Clark Kent arrive to get the story for the Daily Planet.
Meanwhile, Superman is have problems of his own. The war may be over, but after Superman defeats Atom Man, avenger of the master race, he is left in a weakened state. Under the swastika bearing device that gives Atom Man is super strength is a green crystal (Kryptonite) that causes Superman to smell ash and rot and something else that is familiar, but he just can't remember what it is. The effect of the crystal on Superman continues, causing him to have strange dreamlike interactions with his parents who died when Krypton was destroyed. Suddenly plagued with self-doubt about his purpose and place as a foreigner on earth, Superman struggles with his identity.
Superman's struggle with his identity mirrors that of Roberta Lee's struggle to fit in and accept this part of Metropolis as her new home. Tommy is a great big brother to Roberta, and Jimmy Olsen, Clark Kent/Superman and Lois Lane all offer support as she struggles to find herself and fit in.
I really love a good Superman story and Superman Smashes the Klan is one of the best I've read. The story was originally issued in three limited edition comic books before the graphic novel was published, which is also divided into three chapters. Yang has diversified the characters more than the original 1946 radio program, and has made Roberta Lee and Superman the main protagonists. He has cleverly kept the story in the past yet the overriding issues haven't yet been resolved and the issues of identity and racism will definitely resonate with today's readers. Chuck and his uncle are perfect examples of how racism is passed on from one generation to another. Chuck almost becomes what his uncle wants, mostly because he is afraid to stand up to him for fear of what his uncle will do to him and his mom. Yang gives readers a Chuck who is at the point where he can become racist or reject it. His feelings of helplessness are so real and it's a hard choice for a kid to make. But I loved how Yang handled it.
One of the things Yang emphasizes is the importance of being a part of an accepting community. Tommy and even Roberta have supportive parents and they both find friendship immediately with the new baseball team Tommy joins. Roberta also find friendship and acceptance with Superman, who takes her under his cape, and Lois Lane, who becomes a kind of mentor for Roberta's writing aspirations. Yang also gives his characters much more agency than they were ever given in the old Superman stories. No longer passive "victims" of evil doers waiting for Superman to rescue them, they often take matters into their own hands to help themselves.
The art for Superman Smashes the Klan was done by Gurihiru, a Japanese team of two women, Chifuyu Sasaki and Naoko Kawano, who have had lots of experience doing the artwork for a number of DC, Marvel, and Dark Horse comics. Their work here is done with a palette of bold and subtle colors, and each of the cells are clean and uncluttered, and really help move the story along.
Be sure to read Yang's essay "Superman and Me" in the back matter. It is interesting, informative, historical and not what you might expect.
Superman Smashes the Klan is everything I could want in a graphic novel and more.
This book is recommended for readers age 12+
This book was purchased for my personal library
You can listen to the original 1946 radio version of "Clan of the Fiery Cross" HERE
Posted by Alex at 10:41 AM