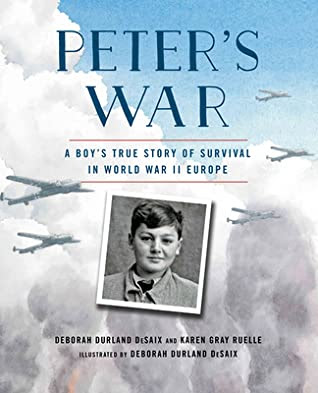 Back when this was a new blog, I reviewed a book written by Deborah Durland DeSaix and Karen Gray Ruelle called The Grand Mosque of Paris: A Story of How Muslims Rescued Jews During the Holocaust. It is a book that has stuck with me ever since, so when I received an ARC of their new book, I was pretty excited. Peter's War is the story of a young boy who was able to survive the Holocaust thanks to quick thinking and the help of caring French citizens.
Peter Feigl, born in Berlin to loving parents, was only three-years-old when Adolf Hitler seized power in Germany in 1933 and began his war against Europe's Jews. Sensing they were in danger despite being secular Jews, the Feigl's had Peter baptized in a Catholic church, then moved from Germany, first to Czechoslovakia, and then to Vienna, Austria. But even though he was a baptized Catholic, the kids still taunted him for being Jewish.
When Peter was about nine-years-old, Hitler and the Nazis marched into Austria and declared it to be part of the German Reich, and once again, Peter's parents decided it was time to move - this time to Brussels, Belgium. But only two years later, the Nazis invaded Belgium and this time they arrested Peter's father.
Peter, his mother and grandmother decided to flee to France, joining the crowds of people on the road with the same idea, despite the frequent strafing from Nazi planes overhead. When they reached Paris, they were told to go to Oloron-Sainte-Marie for help, but once there, they were arrested and taken to Gurs, an internment camp in southern France. Eventually, they were released and went to Auch, where they were miraculously reunited with Peter's father. But France wasn't safe either, now that the Nazis had defeated the French.
Peter's parents decided to send him to a summer camp in Condom. His father visited him once, giving him a package of valuables for safe keeping. After that, both of his parents were arrested and disappeared. Peter was on his own in a hostile country. When the police came to arrest him, the camp director tricked them each time. And even though she managed to get him passage on a ship to the United States, the Nazis closed the port in Marseille and Peter, now 13, was trapped and alone in France.
In 1943, however, Peter was "sent to a children's home in Le Chambon-sur-Lignon, a tiny village in the mountains" (here Peter's story is somewhat reminiscent of the novel Village of Scoundrels by Margi Preus). Though happy here, Peter found himself on the move again, this time to a boarding school in Figeac, France.  Not surprisingly, it didn't take long for Peter, now 14, to find his way into the French Resistance, where he was especially helpful because he spoke fluent German.
But when the Nazis came to Figeac looking for males between 16 and 54, it was time for Peter to leave France and escape to Switzerland, which he did on May 22, 1944. Peter Fiegl was finally truly safe.
Peter's War is an interesting account of one boy's determination to survive despite losing his family and having to be continuously on the run from the Nazis. And it also highlights how determined the Nazis were to capture every Jewish person, either to exterminate them or to simply work them to death. It also shows readers that there were people who cared enough to risk their own lives to help Peter.
This is a picture book for older readers and it is a useful book for introducing a school unit on WWII and National Socialism to young readers. After his father came to visit him in camp, just before he and Peter's mother disappeared, Peter started keeping a diary, which he continued to do throughout the war. These diaries explain why the authors had so much information about Peter's activities and feelings throughout the war. Excepts of these diaries appear alongside some of the illustrations throughout the book, as do photographs of Peter, his parents, and the places where he lived.
Peter's War is an meaningful addition to Holocaust literature, and now that there are fewer survivors to bear witness, as this book does, stories like Peter Feigl's become more important than ever.
Aside from this helpful map at the front of the book, back matter includes extensive Notes, a Bibliography, and Recommended Resources. The only thing I wish had been included is a timeline.
This book is recommended for readers age 8+
This book is an ARC received from Holiday House
Posted by Alex at 11:21 AM